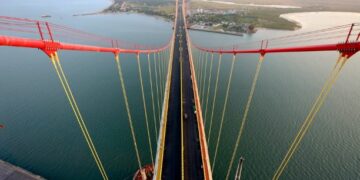 Nairobi, May 19 (Xinhua) — U.S. Secretary of State Antony Blinken’s recent virtual travel to Africa has turned out to be a fresh political maneuver to smear China and undermine burgeoning China-Africa cooperation.

Using the same ploy inherited from his predecessors, Blinken has touted the old cliche of “Chinese debt trap,” attempting to mislead the world through kindergarten mathematics, which has been refuted by African officials and scholars.

“If someone is coming along and saying I’m going to invest a lot of money in your country, but it’s a loan, so, that means you have a debt and you’re going to have to pay it back someday and if that is too great and you can’t pay it back, then I’m going to own the asset in question,” Blinken told the Alumni of the Young African Leaders Initiative in a virtual discussion in late April, hinting at China’s loans and investment across the continent.

“If we break down African countries’ foreign debt, multilateral financial institutions and commercial creditors hold more than three-quarters of the total, and so bear a greater responsibility for debt relief,” said Chinese Foreign Ministry spokesperson Wang Wenbin at a regular press conference in late February.

“Not a single African country had debt difficulties due to its cooperation with China,” Wang said.

“When African countries have economic problems, China is always ready to find proper solutions through friendly consultation. We never press countries having difficulties on debt repayment, not to mention asking them to sign any imparity clauses,” he said.

“In the meantime, China attaches high importance to debt suspension and alleviation in Africa … We have signed debt relief agreements or reached debt relief consensus with 16 African countries,” Wang said.

“The Chinese ‘debt trap’ is a false allegation, but it is true that some people are sowing discord between China and Africa with ill intentions. Anyone with an objective mind will come to a fair conclusion on that,” he added.

“One thing that is very particular about Chinese loans is sustainability. This whole thing about taking over assets just doesn’t make sense,” said Charles Onanaiju, director of Nigeria’s Center for China Studies, describing Chinese loans as neither toxic nor threatening.

“The issue of the ‘Chinese debt trap’ cannot arise here because we have not seen it,” said Zambian economist Kelvin Chisanga.

“Let me correct the impression that the debts are only owed to China. We have debts to a number of bilateral and multilateral partners and we treat them equally,” Kenya’s Cabinet Secretary for National Treasury Ukur Yatani told media.

Some 30 percent of Kenya’s external debt comes from commercial banks, 30 percent from bilateral lenders and the remaining 40 percent from multilateral financiers, said Beatrice Matiri-Maisori, a senior economics lecturer at the Riara University of Kenya.

“We have quite an array of financial lenders in the country. So, I wouldn’t say in any way that China is actually getting Kenya or any other African country into a debt trap,” Matiri-Maisori told Xinhua.

The Debt Management Office (DMO) of Nigeria has ruled out any form of concerns over Nigeria’s indebtedness to China, deeming Chinese loans not only project-tied but also concessional.

“Those are all concessional loans. No reason to be worried about them. They are all project-tied, which Nigerians should be happy about,” DMO Director-General Patience Oniha told the local ARISE NEWS Channel.

A recent research from a China-Africa workshop in Johns Hopkins University found that Chinese banks are willing to restructure the terms of existing loans and have never actually seized an asset from any country.

The researchers have documented 16 cases of debt restructuring worth 7.5 billion U.S. dollars in 10 African countries between 2000 and 2019, and found that China wrote off the accumulated arrears of at least 94 interest-free loans amounting to over 3.4 billion dollars.

China has played a significant role in helping African countries manage their debts, according to the research.

Flagship projects constructed with China’s support have promoted Africa’s prosperity and development by creating numerous jobs for local people and guaranteeing their access to basic services such as water, electricity, transport and skill learning.

“The financing provided by China is mainly used for development projects such as transportation infrastructure, power transmission lines and river dams, which are in line with Kenya’s national development agenda, and aimed at promoting its national economic development and improving the people’s livelihood,” said Cavince Adhere, an international relations expert in Kenya.

With China’s help, over 6,000 km of railways, 6,000 km of roads, nearly 20 ports and over 80 large power plants have been built in Africa. China’s direct investment in Africa in 2019 had grown by 100-fold compared with 20 years ago, according to the Chinese Foreign Ministry.

As the COVID-19 pandemic has brought the worst economic crisis worldwide in decades, Chinese projects and investment have been helping African countries weather the storm.

As the pandemic restricts people’s movements, the Chinese-built Standard Gauge Railway (SGR) linking Kenya’s port city Mombasa to the capital Nairobi continues to support the flow of goods critical to the economy.

In neighboring Ethiopia, Dejen Gezu is among 34 new graduate drivers who are excited about their new careers on the Chinese-built Ethiopia-Djibouti railway. After a Chinese-sponsored railway technology training program that lasted for more than two years, Gezu and his fellows are ready to embark on the promising journey.

During a graduation ceremony held on May 4, Ethiopia’s Transport Minister Dagmawit Moges said the young graduates will be able to serve the country with the knowledge and skills they have learned from the Chinese, voicing hope that Ethiopia will eventually have locals fully manage and operate the country’s railway system.

There is still broad scope for China-Africa cooperation to grow.

“For the first time in the history of Africa, we have a partner that is both willing and able. What is needed is to meet the Chinese in the middle so that both of us can walk the long walk,” said Onanaiju.

“China itself has been a great recipient of international financial flow, which it has used very efficiently and effectively in modernizing its economy. We can engage (with) their experience to develop our own framework for sustainable modernization,” Onanaiju added.