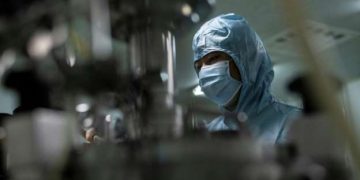 China races to find virus vaccine, put scandals in the past

China races to find virus vaccine, put scandals in the past A researcher at the Yisheng Biopharma company lab in Shenyang, one of a number of firms in China trying to develop a vaccine for COVID-19

June 13 (AFP) – China has mobilised its army and fast-tracked tests in the global race to find a coronavirus vaccine, but its labs also have an image tarnished by past health scandals to overcome.

Six months after the first cases emerged in the city of Wuhan, China has moved quickly to develop a vaccine and is involved in several of the dozen or so international clinical trials currently under way.

Researchers have reported promising early results from tests on humans and monkeys, and authorities hope to have the first shots ready for the public this year.

The Military Academy of Medical Sciences is among those working on a vaccine, in partnership with a pharmaceutical firm.

China has authorised fast-track procedures, allowing preclinical phases — such as animal tests and other studies — to be conducted at the same time instead of one after the other.

But Ding Sheng, dean of the School of Pharmaceutical Sciences at Beijing’s Tsinghua University, sounded a note of caution around using “non-conventional methods”.

“I understand that people are eagerly waiting for a vaccine,” Ding said in the People’s Daily, a Communist Party organ.

“But on a scientific point of view, we can’t lower our criteria, even in an emergency,” he said.

Ding also questioned the decision to authorise phase one and two clinical trials at the same time, allowing labs to avoid having to seek authorisation before proceeding from one to the other.

Nick Jackson, of the Coalition for Epidemic Preparedness Innovations (CEPI), however, pointed out that China was not the only country to do this.

“Many organisations globally are conducting adaptive trials that allow for rapid transition from phase one to two studies,” said Jackson, whose organisation funds research into vaccines.

“This approach is necessary given the urgent need for vaccines.”