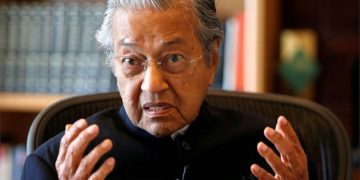 After nine-months of negotiations, China’s Communications Construction Company (CCC) last week finally slashed the cost of its East Coast Rail Link contract in Malaysia by over 30 per cent, from US$15.9 to US$10.6 billion. Due to the reduction, the length of track was reduced by 6 per cent,  from the original three phases of 688-km to two-phases of 648-km.

All this, despite the fact that the original contract had a built-in penalty of a whopping US$ 5 billion that the recipient nation had to pay in the case of a one-sided termination.

Signed by former Malaysian Prime Minister Najib Razak, the three-phase project was to be built at the cost of US $20 billion. It was touted as a “game changer” connecting Malaysia’s capital city to several population centers in the northeast and east.

Last May’s elections  ended in  Najib Razak’s historic defeat and the victory of his mentor, 95-year old Mahathir Mohamad. Corruption charges were slapped on the Najib regime. The rail project was cancelled a month later. Mahathir Mohamad has since persisted in calling it ‘too expensive’ and an ‘unfair’ project that would ‘leave Malaysia indebted’ for generations.

Mahathir Mohamad was Malaysian Prime Minister for 22 years — form 1981 to 2003. His standing up to Western powers on several issues had earned him the epithet “maverick”.  Now he is standing up to China with the cancellation of a big Belt and Road Project.

The Malaysian incident is beginning to echo in countries which are part of the BRI. Regime changes in Sri Lanka, Pakistan, and more recently in the Maldives, did see investigations being launched against China’s BRI projects signed before.

But no recipient nation other than Malaysia has managed to obtain such a favorable re-writing of terms. Malaysia’s winning such an unprecedented concession could trigger similar demands from other BRI partners.

In this context, it is interesting to note that last week, when the Chinese were re-writing various terms of their rail construction contract with Malaysia, Sri Lanka inaugurated its China-built, fastest and first ever since independence, 26.75 km standard gauge rail link connecting the coastal city of Matara with Beliatta in Hambantota district.

The variance in cost can be partly attributed to local conditions, the terrain, cost of living and labor.

Sri Lanka’s Matara-Beliatta rail link, for instance, includes a large number of crossings, over and under passes, two 606 meters and 238 meters long tunnels, two viaducts across the Nilwala river and Wehella floodplains plus two of Sri Lanka’s longest bridges, one 1.5 km and the other 1.04 km.  China’s most iconic Ethiopia-Djibouti rail had cost the host country no more than US$ 7 million per km.

Nevertheless politically, the Malaysian deal may still trigger some fireworks. At the very least, China’s BRI partners have to explain the nuances to domestic constituencies. The opposition, as in Namibia, will be happy to raise a storm over the “complacency” of the government about Chinese rail projects.

The most transformative rail project of the BRI in Africa is the Ethiopia-Djibouti 470-km standard gauge which is fully electrified, fully financed and built by the Chinese. Africa’s last rail lines were built during the late ninetieth and early twenties centuries by their British and French colonisers.

Today, the China-built rail connects landlocked Ethiopia’s capital Addis Ababa to Djibouti’s port of Doraleh, the region’s gateway to the Suez Canal and the Red Sea.

Starting in 2011, the rail link took US$ 4.5 billion and nearly seven years to become operational in January last year. Over 95 per cent of Ethiopia’s foreign trade today uses these freight trains that can lug five to ten 100-TEU containers on a daily basis. It symbolizes the national pride of Ethiopians. It is connected to the country’s sustained ten per cent GDP growth which has ensured better living standards, improvement in life expectancy and even a political rapprochement with Eritrea.

On the flip side, since 2000, Ethiopia has availed over US$ 12 billion in loans from China. Djibouti has received US$ 1.4 billion which amounts to 75 per cent of its gross domestic product.

Djibouti is where China opened its first ever naval base in August 2017. This region has since seen China’s expanding peacekeeping and conflict prevention initiatives.

However the iconic train does break down. Ehiopia has also faced problems of repayment. It has already asked Beijing to restructure debt repayments. The case resembles Sri Lanka’s leasing Hambantota port for 99-years after it found that it cannot meet its repayment commitments.

There are also cases of self-financing.  In the South Caucasus part of Eurasia, China completed the refurbishing of the 846-km Baku-Tblisi-Kars railway by October 2017. It connects the new Azerbaijani port of Alat in the Caspian Basin with Georgia and Eastern Turkey with onward access to the European rail grid. But unlike the BRI’s other rail projects, this is largely self-financed by Turkey and Azerbaijan.

The link now carries nearly 3,000 passengers and nearly 20,000 metric tons of cargo on a daily basis. The capacity is expected to be trebled by the third quarter of 2019.  As for China, this rail line provides the shortest land access to Europe.

Then there are issues of delays and cost escalation. China Railway Construction Corp (CRCC) and the Bangladesh Railways had signed a US$ 3.14 billion contract in August 2016 for building the 215-km Padma railway from capital Dhaka to Jessore. Negotiations on interest rates and installments on China’s 80 per cent funding delayed the final contract by 20 months resulting in cost escalation to US$ 4.1 billion.  The average per km cost was as high as US$ 18 million per km.

But the hike may be because this project involves construction of 14 new railway stations, procurement of 100 passenger coaches, building nearly 300 minor and major bridges including the 6.15-km double-decker Padma bridge with a four-lane road on the upper deck and a broad gauge single railway track on the lower deck, all to be completed by June 2022.

Given that the Padma Rail Link is being built under the Trans-Asian Railway (TAR) project and aims at creating an integrated freight railway network across Europe and Asia, Chinese diplomats have also proposed China funding and building a Kolkata-Kunming bullet train.

BRI partners gathering in Beijing next week for the 2nd Belt & Road Forum for International Cooperation (BRF) are going to dissect various details of this Malaysian clincher of 30 percent rebate. Other than raising some eyebrows, this may trigger a chain reaction amongst China’s close allies like Pakistan which may demand similar price reduction.

Several projects have already faced rough weather including reductions, even cancellations in BRI partners like Sierra Leone, Bangladesh, and Myanmar.

Conversely, the revised Malaysian deal last week can also be seen as a big endorsement of the 2nd BRF hosting delegations from nearly one hundred countries including forty heads of state/government and chiefs of major international organizations.