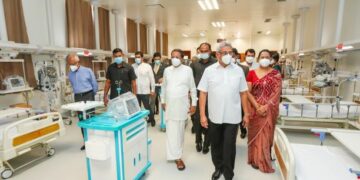 President Rajapaksa unveiled a commemorative plaque during the opening ceremony of the China-Sri Lanka Friendship National Nephrology Hospital in the ancient city of Polonnaruwa.

Photo taken on June 11 shows the China-funded nephrology hospital in Polonnaruwa, the second-largest city in the North Central Province in Sri Lanka. (Xinhua)

“During the past few years, both China and Sri Lanka have worked together to overcome various difficulties, especially the heavy impact brought by the COVID-19 epidemic, and succeeded in completing this modern and state-of-the-art hospital on schedule,” Qi said.

The hospital was requested by former President Sirisena during a visit to China in 2015. The complex took 30 months to construct.