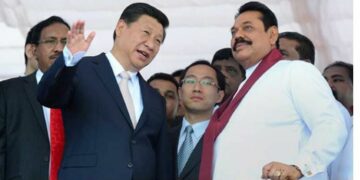 Colombo, April 17: China’s US$ 1.4 billion Colombo Port City (CPC) project launched with fanfare in the presence of Chinese President Xi Jinping on September 17, 2014, is in deep legal trouble. The controversial and long-delayed project was about to parcel out to foreign investors a major part of the 269 hectares reclaimed from the sea, when it ran into a political storm and more than a dozen petitions  in the Supreme Court.

The CPC’s basic structure, contained in the Colombo Port City Economic Commission (CPCEC) Bill was presented to parliament on April 8.  The petitions filed against the Bill said that it grossly violates the Sri Lankan constitution and that, if it is to become law, it will have to get a two thirds majority plus approval in a referendum. The provisions of the Bill amounted to changing the constitution fundamentally, and therefore, it would need two-thirds majority plus a referendum to get through. said.

The CPCEC Bill seeks to establish a high-powered five to seven member Commission entrusted with the administration, regulation and control of all matters connected with businesses and other operations in and from the CPC. The CPCEC can lease and sell on freehold basis land in the CPC. CPCEC is a Single Window Investment Facilitator for investments. It would exercise all the powers and functions of any applicable regulatory authority under any written law and obtain the concurrence of the relevant regulatory authority. These regulatory authorities will provide concurrence as a matter of priority.

“The discretion and powers of Sri Lankan authorities under the various laws thus stands removed,” observes legal expert Dr.Jayampathy Wickarmaratne in an article in The Island.

The Commissioners appointed by the Lankan President need not be Sri Lankan citizens, he pointed out. This is a major departure from established practice. Dr. Wickramaratne fears that foreign nationals in it could well work against Sri Lanka’s interests and thus violate Art 1 of the constitution which says Sri Lanka is a sovereign country. The removal of the discretionary powers of the various regulatory authorities is arbitrary and a violation of the Right to Equal Protection of the Law guaranteed by Article 12 (1), he says.

Clause 25 of the bill says that only persons authorized by the Commission can engage in business in the CPC. Clause 27 requires that all investments should be in foreign currency. But foreign currency deposited in a Sri Lankan bank cannot be used for investment!  “Thus, Sri Lankans cannot invest in the Port City using Sri Lankan rupees; neither can they use foreign currency that they legally have in Sri Lanka. The above provisions are clearly arbitrary and discriminatory and violate equality and non-discrimination guaranteed by Article 12. It violate the fundamental right to engage in business guaranteed by Article 14 (1) (g),” Wickramaratne avers.

Under Clause 35, any person, whether a resident or a non-resident, may be employed within the Port City and that such an employee shall be remunerated in a designated foreign currency, other than Sri Lankan rupees. Such income shall be exempt from income tax. Clause 36 provides that Sri Lankan rupees accepted within the Port City can be converted into foreign currency. Under Clause 40, Sri Lankans may pay for goods, services, and facilities in Sri Lankan rupees but would be required to pay a levy for goods taken out of the CPC, as if they were returning from another country!

Dr. Wickramaratne points out that Clause 62 requires that all disputes involving the Commission be resolved through arbitration, thus ousting the jurisdiction of Sri Lankan courts. In any legal proceedings instituted on civil and commercial matters, where the cause of action has arisen within the CPC or in relation to any business carried on in or from the Port City, Clause 63 requires Sri Lankan courts to give such cases “priority and hear them speedily on a day-to-day basis to ensure their expeditious disposal.”

Clause 73 provides that several Sri Lankan laws listed in Schedule III would have no application within the Port City. Such laws include the Urban Development Authority Act, Municipal Councils Ordinance, and the Town and Country Planning Ordinance. Under Clauses 52 and 53, exemptions may be granted by the Commission from several laws of Sri Lanka, including the Inland Revenue Act, Betting and Gaming Levy Act, Foreign Exchange Act, and the Customs Ordinance.

“The Commission being empowered to grant exemptions from Sri Lankan laws, undermines the legislative power of the People and of Parliament and violates Articles 3 and Article 4 (c) of the Constitution,” Dr.Wickramaratne points out.

However, the State Minister of Money & Capital Markets, Ajith Nivard Cabraal, said that the CPC would be under Sri Lankan jurisdiction. All  major decisions with regard to it will be taken by the President of Sri Lanka. Parliament will oversee the CPCEC’s City’s activities. Financial, legal and other administrative activities will be governed and regulated by the Lankan government. Financial activities will be done with concurrence of the Central Bank of Sri Lanka. Law and order will be subjected to local jurisdiction, he clarified.

All taxes in the CPC will be imposed by the CPCEC but will be credited to the Consolidated Fund of Sri Lanka and will, in turn, go to the Inland Revenue Department. Only foreign direct investors will invest in the CPC. But foreign legal and accounting firms cannot be set up in the CPC. And all company registering, licensing, approvals and regulation of activities will be done by the Commission in consultation with the government and regulatory bodies.

Sufficient safeguards have been built into the Bill to protect Sri Lankan interests and ensure compliance under local laws, Cabraal said. The President will present all investment approvals in the CPC to the Lankan cabinet. The President will regulate tax concessions, licenses, and investment approvals. These would be done with the concurrence of Lankan regulators such as the Central Bank or the Auditor General. Cabraal also said that such decisions would be put on the gazette and the documents presented to parliament within three months, or they would become defunct. The Attorney General has said that the CPCEC Bill does not violate the constitution.

Justifying the CPC project, Cabraal said with Sri Lanka’s debt-to-GDP ratio climbing to a dizzying 98%, high debt repayments pending over the next few years, persistently low economic growth and challenges in attracting foreign investment, the government needed the Port City project as a catalyst to jump-start economic and income growth. Sri Lanka needs a better and modern economic climate as it has dropped in the World Bank’s Ease of Doing Business rankings to the 99th position, behind India, Bhutan and Nepal in the South Asian region.

Cabraal pointed out that the Commission will be audited by an international auditing firm that will be selected with support from the Auditor General. He also went on to say that the Government would not limit its reforms to the Port City Commission and would take steps to expand the reforms across the larger Sri Lankan legal framework.

Cabraal denied that only Chinese will invest in the CPC and decried the propaganda that it will be a “Chinese colony” as alleged by the former Justice Minister Wijedasa Rajapakshe and the Janatha Vimukthi Peramuna leader Anura Kumara Dissanayake. Cabraal informed that during his recent visit to Oman and Qatar there was interest in investing in the CPC. Overall US$ 15 billion is expected to come as FDI to the CPC and 85,000 locals will get jobs.