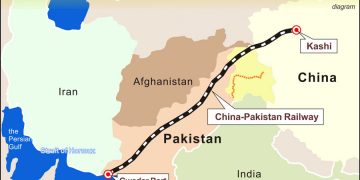 Chinese scholar Hu Shisheng told The Hindu that the prime strategic motivation behind the CPEC project is to ensure Pakistan’s economic stability. He assumed that this would help dry up terror sanctuaries in Pakistan, and prevent the outflow of militants into the rest of the region, including China and Central Asia.

Professor Long Xingchun, Director of Center of India Studies, at China West Normal University, said that  “the CPEC’s emergence is more important to Pakistan than to China.”

The CPEC passes through a section of Pakistan Occupied Kashmir (PoK) and Balochistan where the security situation is getting worse by the day with India threatening to launch a retaliatory strike to avenge the Pakistan-based militants’ attack on the Indian army base at Uri in Kashmir.

Security for the CEPC was apparently the primary focus of the talks between Chinese Prime Minister Li Keqiang and his Pakistani counterpart, Nawaz Sharif at their meeting on the sidelines of the United Nations General Assembly (UNGA) on September 21.

Li did not hide Beijing’s security concerns, when he stressed: “It is hoped that Pakistan can reinforce prevention on the security risk of the projects and continue to provide safety protection to the  construction and Chinese personnel in Pakistan.”

India has raised Pakistan’s alleged human rights violations in Balochistan at the international level — a policy shift that was underscored by New Delhi’s assertions on the Baloch issue, earlier this month, at the UN Human Rights Council in Geneva.

The Hong Kong based South China Morning Post quoted Pakistan commentator Najam Sethi as saying that “Bugti’s asylum suggests that India will make Baluchistan a central plank of its strategy, politically and diplomatically.” He added: “China is beginning to worry about all these.”

India’s exertions in Baluchistan have not gone unnoticed in China. In an earlier interview with The Hindu, Chinese scholar Hu Shisheng highlighted that Prime Minister Narendra Modi’s reference to Baluchistan in his independence day address “It  signaled a watershed moment in India’s policy towards Pakistan in the future,” Hu said.

“We cannot figure out what could be its result and consequences, but my personal hunch is that it could be disastrous for the whole region; for all the relations — especially between Pakistan and India, China and India, especially among the three countries. That is the real concern.”

Chinese academics have also begun to debate the regional fall-out of the Kashmir issue, and the benefits to the CPEC, in case a settlement is achieved.

“If India and Pakistan can resolve the Kashmir problem, CPEC would not be an obstacle among China, India and Pakistan,” Professor Long Xingchun, Director of Center of India Studies, at China West Normal University, told The Hindu.

“The CPEC can then be renamed as China-South Asia corridor benefiting all participants,” he said hopefully.