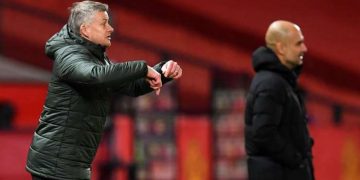 December 24 (ESPN) – Carabao Cup holders Manchester City will face off against Manchester United while Tottenham Hotspur will play Brentford in the semifinals of the competition.

The matches will commence on the week of Jan. 4, 2021 at Wembley, with the final pushed back from February to April 25 in attempt to have supporters in the stands.

City have won the Carabao Cup, traditionally known as the League Cup, the past three seasons under manager Pep Guardiola, while Ole Gunnar Solskjaer is still seeking his first trophy as United manager.

Championship side Brentford ousted Premier League club Newcastle United to set up the tie against Spurs, who last won the League Cup in the 2007-08 campaign.

Spurs manager Jose Mourinho is also attempting to win his first title with the club, having lifted this trophy three times while leading Chelsea and once with Manchester United.

The winners of this season’s tournament will not qualify for the Europa League as in the past, but will instead go into the UEFA Europa Conference League, a new European competition.