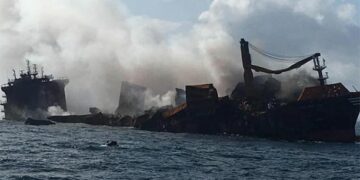 Reports revealed that water leaking into the vessel has caused it to sink by 50 per cent.

The efforts to tow the Singapore-registered container ship began this morning (June 02) after a naval team joined the salvor team on board to tow it away from Sri Lanka capital.

On Tuesday (June 01), the salvor team members had boarded the container ship after dousing the inferno.

Salvage operations are being led by the Dutch company SMIT, which had sent specialist fire-fighting tugs.

Meanwhile, President Gotabaya Rajapaksa directed the Chairman of Marine Environment Protection Authority (MEPA) to tow the vessel into deeper seas in order to prevent further marine pollution. The instructions were given during a special meeting held at the Presidential Secretariat on Tuesday.

On May 20, a massive fire erupted on MV X-Press Pearl carrying 1,500 containers, including 25 tonnes of nitric acid while it was in anchorage about 9.5 nautical miles northwest of Colombo Harbour.

It is believed that the fire was sparked by a leak of nitric acid on the 186m-long vessel. Monsoon winds had fanned the flames out of control. Fire-fighting efforts carried out by nine Sri Lankan ships and three Indian vessels along with international salvage experts were in full swing for nearly two weeks.C