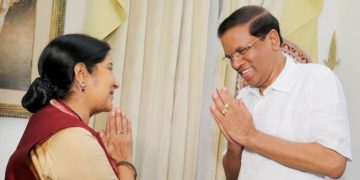 Sushma Swaraj, former Minister of External Affairs of Indian passed away earlier this week and Prime Minister Narendra Modi said, “A glorious chapter in Indian politics comes to an end. India grieves the demise of a remarkable leader who devoted her life to public service and bettering lives of the poor. Sushma Swaraj Ji was one of her kind, who was a source of inspiration.”

Sri Lanka shares the sentiments expressed by the Indian Prime Minister as Sushma Swaraj was a dear friend of this country. She had a special connection with Sri Lanka because she represented the Vidisha constituency in Madhya Pradesh, the birth place of Emperor Ashoka’s consort Vidisha Devi, mother of Arahath Mahinda and Princess Sanghamitta.

Sushma Swaraj, as MP for Vidisha as well as later as a senior minister visited Sanchi, which is 8 kilometres away from Vidisha on many occasions and she closely associated with late Ven. Hadigalle Pannatissa Nayake Thera and later Ven. Banagala Upatissa Nayake Thera. In fact Ms. Swaraj made it a point to pay homage at the Mahabodhi Temple in Maradana on every visit to Sri Lanka.

She was a popular minister in Narendra Modi’s first term as Prime Minister, but did not contest parliamentary elections earlier this year due to ill health. She was cremated with full state honours in the capital Delhi. Senior leaders across political parties and BJP lawmakers, including Prime Minster Narendra Modi, attended the funeral. The news of her death prompted an outpouring of grief and condolences both from fellow politicians and from Indians across the globe.

As External Affairs Minister she was always willing to help Indians facing difficulties in foreign countries. Her image for Indians abroad was ‘a person with quick wit and forever a helping hand.’ Her unique identity was ‘a strong woman with an assuring smile on her face, the red bindi, the low bun and the long trail of sindoor, along with her saree and jacket’. As an Indian writer described, she was ‘the figure of a woman who did not hesitate to wear her culture on herself.’

When Sushma Swaraj visited Sri Lanka as Minister of External Affairs, she clearly showed her sensitivity towards Sri Lanka and her perfect understanding about the internal and external issues of this country. At one discussion, she cut short her own official delegation’s persuasive attempts to push Sri Lanka to immediately decide about a certain infrastructure development. When a very senior officer said that they wanted an early decision as India cannot wait, Minister Sushma Swaraj silenced him with the words, “No. If His Excellency Maithripala Sirisena thinks this is not the best time for that project, let us wait. We have to understand his sensitivities”.

Sushma Swaraj’s association with Sri Lanka was not limited to the tenure as External Affairs Minister. In September 2012, as Leader of Opposition in the Lok Sabha and Member of Parliament from Vidisha where Sanchi is situated, she unveiled a painting at the Sri Lanka High Commission in New Delhi, in commemoration of the 2600th year of the Sambuddhatva Jayanti.

The painting depicts Emperor Asoka requesting his son Arhat Mahinda to set off to Sri Lanka from Sanchi in Vidisha with the message of Buddhism and Theri Sanghamitta and the sapling of the sacred Bodhi tree being received in Anuradhapura in Sri Lanka in the 3rd Century BC. It was not merely an unveiling of an artist’s impression but much more than that as it was a celebration of the historic civilizational ties between India and Sri Lanka. It is the celebration of the life of Emperor Asoka who forged India into a single nation-State. Whose distinctive voice of peace, non-violence and conquest by moral force and good governance echo over time. In fact several Asokan ideals and symbols continue to resonate in post-colonial resurgent India.

It is the celebration of the strong relations between two neighbours that flourished 2300 years ago during the time of Emperor Asoka and King Devanampiyatissa of Sri Lanka – an Emperor of a strong India and the King of a much smaller country. This relationship, in its content, holds lessons that we could draw from even today, for fashioning partnerships of trust, friendship and cooperation not only between neighbours, but between all nation-States of the modern world.

It was also a celebration of the Enlightenment of Prince Siddhartha as Gautama Buddha 2600 years ago, that Great Teacher of peace and non-violence of India, who’s Message has traversed far beyond and brought solace to thousands in all corners of the world. Furthermore, it was a celebration of the vibrant and friendly relations which continue to exist between India and Sri Lanka. In fact, it is in this context that, in recognition of the shared cultural and civilisational links that provide the bedrock to bilateral relations between India and Sri Lanka.

In her remarks following the ceremonial unveiling of the painting, Leader of Opposition Sushma Swaraj stated that she is honoured to participate in this event as the Member of Parliament from Vidisha where Sanchi is situated. She recalled the important cultural and Buddhist links between India and Sri Lanka and reiterated India’s commitment to the unity, sovereignty and territorial integrity of Sri Lanka.

Referring to her visit to Sri Lanka earlier this year, leading a multi-party Parliamentary delegation, the Leader of Opposition stated that she was impressed by the resettlement, rehabilitation and reconstruction efforts of the Government of Sri Lanka, as well as the approaches made by all parties towards reconciliation. She expressed the hope that the reconciliation process would move swiftly ensuring peace, prosperity and a bright future for Sri Lanka.

The High Commissioner, welcoming Minister Sushma Swaraj said, “For us in Sri Lanka, you are a very special lady. Your Parliamentary constituency, Vidisha, where Sanchi is located, was home to Emperor Asoka’s children Arhat Mahinda and Theri Sanghamitta, thousands of years ago. The Buddha’s teaching, as we know, was based on equality among humans and was open to men and women equally. In Asokan India, it was a woman, Theri Sanghamitta, who was chosen to carry the sapling of the ‘tree of wisdom’ to Sri Lanka. We consider her as the first lady Ambassador to our country on an important Mission, and she is revered continuously through history even to this day, in my country.

It was another Lady, Princess Hemamala from ancient Kalinga who bequeathed the sacred Tooth-Relic of the Buddha to Sri Lanka in the year 371 AC. We in Sri Lanka see you in similar light, as a modern-day leader and an envoy of India promoting regional cooperation and peace. You toil with wisdom, to forge closer relations between the people of our two countries, following a long list of distinguished and inspirational ladies from our past. It is therefore an honour for us to have you unveil this painting which holds a deep, significant meaning for us, and in our view, for our two countries. It is an honour for us to have your name placed in this Mission in a lasting form as the Member of Parliament from Vidisha, a region with which we have a celebrated historical bond.”

Sushma Swaraj became the youngest BJP Cabinet minister in Haryana at the age of 25. She was also the first woman Chief Minister of Delhi and was a seven-time, very loved Member of Parliament.

Sushma Swaraj held the post of the Foreign Minister in the first Narendra Modi Cabinet, from 2014 to 2019, and her job took her all around the world. But not once did she leave her Indian identity behind. She stood tall and proud, well dressed in a minimally decorative saree showcasing to the world the Indian culture.