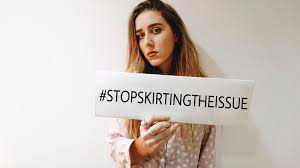 by Editor
in Around The World, Fashion, Lifestyle, Offbeat
Reading Time: 4 mins read
2 0

Those found guilty face up to two years in jail.

Leading campaigner Gina Martin praised the bill as “politics and society at its best”.

Members of the upper House of Lords on Tuesday gave the bill the final seal of approval, and it now only requires the formality of Royal Assent.

The bill was briefly held up last year when a single MP blocked it by shouting “Object!” during a parliamentary vote.

The bill was briefly held up last year when a single MP blocked it by shouting “Object!” during a parliamentary vote.

Christopher Chope, a member of May’s Conservative Party, claimed he was objecting to the manner in which the bill was introduced, but was met with cries of “shame” from MPs.

Martin tweeted that she was “over the moon” about the vote, adding “I AM EXHAUSTED AND SO HAPPY!”.

From Liverpool in northwest England, Martin was attending a music festival in London’s Hyde Park in 2017 when a man rubbed against her while his friend lurked nearby.

“Five minutes later, I saw that his friend… was watching a picture…,” she told AFP earlier. “I knew it was me immediately.”

Martin grabbed the phone and showed the image to police officers, but “they said ‘we can’t really help you’.”

She then decided to campaign to make it illegal, collecting more than 100,000 signatures of support in an online petition.

Martin snatched the man’s phone and ran over to the festival security. “He followed me and I handed him and the phone over to the police,” she says. “They [the police] told me there ‘wasn’t much we can do’ and that if I ‘hadn’t have been wearing knickers it would have been a different story,'” Martin continues. The police officers deleted the photo from the man’s phone and told Martin to carry on with her night.

When she returned home from the festival, Martin threw herself into research and found out that there is no specific legislation against upskirting. Upskirting is already illegal in Scotland after the law was changed by the Sexual Offences (Scotland) Act 2009. But, under the Sexual Offences Act 2003—a law which pertains to the whole UK—upskirting is not considered a sexual offence.

Despite the absence of specific legislation, perpetrators can be prosecuted under other related legal acts. “You can prosecute under an old common law called ‘Outraging Public Decency’ but that law is for when someone has outraged the public,” says Martin. Under that law, people can be charged for things like public urination, or having sex in a public place. The problem with this law, says Martin, is that it suggests acts of sexual harassment—like upskirting—are “a public nuisance,” not sexual offences.

Nebulous legislation aside, a recent YouGov study found that 96 percent of people in the UK believe that a “man trying to take a photo up a woman’s skirt” constitutes sexual harassment. So, why doesn’t the law reflect this?

Recent attempts to bring perpetrators of upskirting to justice have come with mixed penalties. In 2008, a man was fined £500 and ordered to pay another £500 in legal fees after he was caught taking photographs up women’s skirts on trains during a five-month period. Police found over 200 upskirt images on his phone and laptop. According to the Guardian, ten of the women in the pictures were “traced by police, none of whom were aware they’d been photographed.” Meanwhile, other instances have seen repeat offenders receive short prison sentences.

Martin wanted to upskirting to be made illegal under the Sexual Offences Act 2003, and her #StopSkirtingTheIssue petition has already received the backing of over 74,000 people.

“We need to send a message that women’s bodies are not public property and set a clear amendment to the law to deter people from practicing this type of harassment,” Martin had said.

“New legislation would mean anonymity for victims and would deter potential perpetrators from carrying out this act,” she continues.

As well as the backing of thousands of citizens, Martin has the support of cross-party MPs and global law firm Gibson Dunn. Scotland’s twelve Conservative MPs have publicly lent their support to Martin’s campaign, and one MP wrote to the Secretary of State for Justice about the campaign.