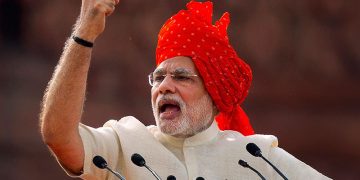 New Delhi, February 1 (newsin.asia):  Even as the Bharatiya Janata Party (BJP) party government at the Indian Center was presenting its last annual budget on Thursday with an eye on the May 2019 parliamentary elections, distressing political news poured in from Rajasthan, a state which it is ruling, and from West Bengal where it is hoping to capture power soon.

In a spectacular showing, the Congress wrested the Mandalgarh State Assembly seat from the BJP, and took both Ajmer and Alwar Lok Sabha seats in Rajasthan.

Even as Congressmen were celebrating the  defeat of  Bharatiya Janata Party`s Shakti Singh Hada by 12,976 votes Congress chief, Rahul Gandhi tweeted:  “Well done Rajasthan Congress! Proud of each and every one of you. This is a rejection of the BJP by the people of Rajasthan.”

In West Bengal, the ruling Trinamool Congress trounced its opponents, the BJP and the Congress. The TMC  wrested the Noapara assembly seat from the Congress and retained the Uluberia Lok Sabha seat on Thursday with a mammoth margin.

In this East Indian State, the main challenger to the Trinamool Congress was the BJP. The Left Front spearhead Communist Party of India-Marxist (CPI-M) not only finished third in both the constituencies, but even forfeited the security deposit at Uluberia.

The Congress als oput up a poor show, taking the fourth position and losing the deposit in both the constituencies.