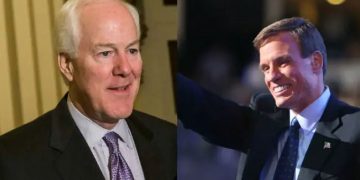 “It is more important than ever that we support our Indian partners as they defend against Chinese aggression,” one of the two Senators who moved the resolution said. Washington, August 13 (Hindustan Times): A bipartisan resolution was introduced in US Senate Thursday that seeks to condemn China’s use of military aggression to change the Line of Actual Control with India and calls for a diplomatic solution.

Senators John Cornyn (Republican) and Mark Warner (Democrat) moved the resolution that “condemns the People’s Republic of China’s use of military force to change the status quo at the Line of Actual Control, as well as its refusal to de- demarcate that Line in accordance with past bilateral agreements with India.”

And it calls for a “ diplomatic solution that rapidly restores the April 2020 status quo at the Line of Actual Control”.

Without specifically mentioning the Indian ban on Chinese apps, the resolution seeks to “commend India for taking steps to secure its telecommunications infrastructure from Chinese security threats and seeks a commitment to to “deepening defense, intelligence and economic ties” between the United States and India and supports bilateral and multilateral partnerships such as the Quadrilateral Security Dialogue, “to promote a rules-based order in the Indo-Pacific”.

“The June 15 conflict between China and India, resulting in the deaths of approximately 20 Indian soldiers, should set off alarm bells regarding the PRC’s provocative actions in disputed territory,” Warner said in a statement.

He added: “This resolution condemns PRC’s actions to change the Line of Actual Control, especially in the midst of diplomatic negotiations between the two countries; and encourages the two nations to find a diplomatic resolution that restores the April 2020 status quo at the LAC.”

“I commend India’s commitment to standing up to China and maintaining a free and open Indo-Pacific,” said Cornyn. “It is more important than ever that we support our Indian partners as they defend against Chinese aggression.”

The two senators are co-chairs of the India Caucus in the senate.