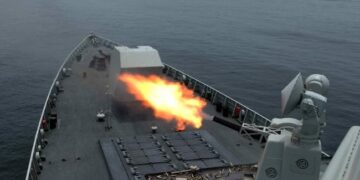 Colombo, September 27: Rush Doshi, the ‘China Director’ in US President Joe Biden’s National Security Council, warns that Beijing has a “Grand Design” to replace the US as the dominant power, not only in Asia, but in the entire world. In his well-received book: The Long Game: China’s Grand Strategy to Displace American Order Doshi warns that if the US and its allies do not stem China, an “illiberal” world order based on “coercion” will emerge, nullifying democracy’s big gains after World War II.

And the way to prevent this calamity is to adopt China’s way of pursuing its goals, Doshi says.

Having a “Grand Design” is only the first requisite. Clarity on the scheme to achieve that goal is equally important, Doshi points out. In pursuit of their “Grand Design” against the US, the Chinese have sequenced their steps. Step by step actions are carried out in a planned and coordinated manner. Fine tuning is done to suit shifting ground realities. This is the model to follow.

Basically, there are three strategies employed by the Chinese for the displacement of the US as the global hegemon. These are military, political and economic. The initial strategy has been to blunt ‘American order’ in China’s immediate neighborhood. The second has been to build ‘Chinese order’ regionally, and the third is to do both ‘globally’.

This approach is based on President Xi Jinping’s belief that the world is in the midst of “great changes, unseen in a century”. He said in 2017 that there were “unprecedented geopolitical and technological shifts which require strategic adjustment on China’s part.”

A key aspect of the unprecedented change, as the Chinese see it, is that the Western powers are “on the path of self-destruction”. In China’s view, the West’s self- destruction began with the UK leaving the European Union in 2016. In addition, there was the election of an inward looking and destructive Donald Trump as US President. The West’s subsequent chaotic response to the coronavirus pandemic in 2020, and the storming of the US Capitol by Trump’s extremists in 2021, made Beijing believe that the “world’s most powerful democracies were withdrawing from the international order they had helped erect abroad and were struggling to govern themselves at home.”

“Time and momentum are on their side”, the Chinese felt.  China’s leadership declared that a “period of historical opportunity” had emerged to expand the country’s strategic focus from Asia to the wider world.

Doshi says that in its pursuit of its Grand Design, China has adopted three “forms of control”: (1) coercive capability (2) inducements (3) establishment of legitimacy.

The rationale for these three are as follows: A rising hegemon (China) has to ‘blunt’ the control of the entrenched hegemon (America) over it. No rising State can displace the existing hegemon if it remains at the latter’s mercy. The second is to control others because no State can become a hegemon if it cannot secure the deference of other States through “coercive threats, consensual inducements, or rightful legitimacy.” The third step is global expansion, through the global blunting of the existing hegemon.

In the Chinese scheme to dominate the world, the lynchpin is the Chinese Communist Party (CCP), Doshi says. The CCP’s nationalist elite seeks to restore China to its due place by 2049 (the centenary of Communist China) by rolling back the “historical aberration” of the West’s overwhelming global influence. The CCP ensures ideological clarity and consistency to the Grand Design and gives the movement the required organizational structure to marshal human, psychological and material resources.

The inherent strength of the CCP enabled China to overcome the severe challenge posed by the US-inspired student revolt which resulted in the Tiananmen Square massacre. Other challenges were the Gulf War, and the Soviet collapse (engineered by the US) which demonstrated US power.  But the 2008-09 Global Financial Crisis, marked by a widespread credit shortage and loss of jobs and income, led Beijing to see US as a declining power. It felt that it was time China made a bold foray into the world at large. The multi-billion dollar Belt and Road Initiative (BRI) to fund infrastructure development in Asia and beyond exploited this opening by endearing itself to the developing countries through loans and technical aid.

Doshi warns that a fully realized Chinese order might eventually involve the “withdrawal of US forces from Japan and Korea, the end of American regional alliances, the effective removal of the US Navy from the Western Pacific, deference from China’s regional neighbors and unification with Taiwan.” Doshi alleges that China’s Belt and Road Initiative and its ‘Community of Common Destiny’, would create “networks of coercive capability, despite consensual inducement.”

He feared that Beijing would acquire leadership over global governance and international institutions, split Western alliances, and advance autocratic norms at the expense of liberal ones. Economically, it would weaken the financial advantages that underwrite US hegemony and seize the commanding heights of the fourth industrial revolution from artificial intelligence to quantum computing.  The Chinese would also field a world-class military force with bases around the world that could defend China’s interests in most regions and even in new domains like space.

In a bid to play a leading regional and global role, China joined regional organizations and launched its own institutions like the Asia Infrastructure Investment Bank (AIIB). It elevated and institutionalized the previously obscure Conference on Interaction and Confidence-Building Measures in Asia (CICA). In contrast, the US has walked out of international institutions.

Doshi urges the US to do what China is doing which is to join and not opt out of international organizations. It should promote economic development in the developing countries and form alliances with democratic countries to challenge and expose the “illiberal” Chinese model and promote the “liberal” US model. It should not be seen as a weak and withdrawing nation.

However, writing in the Council on Foreign Relations website, Charles Dunst says that Doshi is unrealistic about the US’ capabilities. To quote him: “Political winds have shifted. The U.S. public has little appetite for increased defense or foreign aid spending; voters are split on foreign aid, but a clear majority wants less defense spending. Doshi does not grapple with this tension.”

“Doshi says that Washington should help partners develop anti-access/area-denial capabilities. He names Taiwan, Japan, India, and Vietnam as a few that might accept; being already aligned with the United States, they might. But the others he names—the Philippines, Indonesia, and Malaysia—intend to balance the United States and China, which requires not antagonizing Beijing. These countries will not risk their economically vital relationships with China by accepting such provocative US help.”

The United States has not matched China in financing development abroad. Even Japan, a longtime donor and financier, has curtailed its spending in Asia, where poverty and underdevelopment are the most pressing issues. As a Sri Lankan professor once told this writer: “The Americans come with a bag full advice, but no money. But what we need is money.”

Having emerged from armed conflicts, many Asian countries do not want more conflicts here. Indonesia and Malaysia have come out strongly against Australia’s plan to acquire a fleet of nuclear-powered submarines with the help of the US and UK. Even Singapore, Australia’s most reliable ally in the region, has expressed concern. Some ASEAN countries are worried that the AUKUS agreement is an invitation for a Sino-Western war in their midst. They shudder to think that war, the scourge of the Middle East, will be at their doorstep soon.