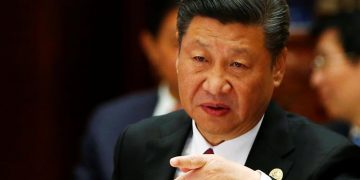 Beijing, April 19 (Xinhua): Despite disruptions created by growing protectionism and unilateralism, China’s Belt and Road Initiative (BRI) has had a strong appeal in both developing and developed economies.

To date, 124 countries and 29 international organizations have signed BRI cooperation agreements with China.

France has agreed to jointly promote BRI-related third-party market cooperation with China, while Italy and China have signed a memorandum of understanding on jointly advancing the initiative.

China-Europe freight trains, an artery of international trade, now link 59 cities in China with 50 cities in 15 European countries, with the cumulative number of trips reaching 14,000 by the end of February.

The latest studies by the World Bank and other international institutions suggest that BRI cooperation will cut the costs of global trade by 1.1 to 2.2 percent and will contribute at least 0.1 percent of global growth in 2019.

As the global economic outlook, especially trade growth, has been on a slowdown trend, the BRI has no doubt added much-needed certainty to the world economy by advancing globalization in a manner that is more open, inclusive and balanced.

More than ever before, the world needs to enhance connectivity to jointly incubate new growth engines and address the problem of unbalanced development.

For developed economies, more active involvement in the BRI will definitely allow them to better tap into the Chinese market that is seeking consumption upgrading and thereby boosting their homeland manufacturing.

Moreover, they can cash in on China’s development opportunities in a myriad of sectors, as modern trade routes under the BRI will boost the flow of not only merchandise but also services, especially those concerning environmental protection, financing, laws, logistics and other spheres where developed countries have advantages.

The second Belt and Road Forum for International Cooperation to be held Beijing is expected to provide a platform for think tanks to exchange ideas on the China-proposed Belt and Road Initiative (BRI) for multinational development, a senior Egyptian researcher has said.

“There is consensus that launching the BRI in 2013 is a game changer in the international scene, as more than a hundred countries joined this future-oriented project,” said Hisham el-Zimaity, secretary general of the Egyptian Council for Foreign Affairs (ECFA), in a recent interview with Xinhua.

In light of growing protectionism and unilateralism, the initiative is facing challenges, including unreal reports by some Western media. Thus closer cooperation among researchers of the BRI countries are required to address the challenges and exchange relevant research and visions, said Zimaity, also Egypt’s former ambassador to Japan, Hungary, Slovenia and Pakistan.

It has been gaining growing popularity ever since, and so far has attracted 124 countries and 29 international organizations to sign BRI cooperation agreements with China.

“Developing countries, especially those in Africa and the Middle East, are all supportive of the win-win approach of the gigantic BRI project,” he said.

Zimaity said that BRI-based cooperation between China and Egypt is reflected in the progress of Egypt’s development process through massive infrastructure projects in various fields, including construction, energy, trade, industry and others.

“Egypt was among the first states to join the BRI and was also the first African state to sign cooperation agreements with the Asian Infrastructure Investment Bank. So, there’s massive cooperation between Egypt and China in this regard,” he said.

The second Belt and Road Forum for International Cooperation is scheduled to open in Beijing in late April. Representatives from over 100 countries, including about 40 government leaders, have confirmed their attendance.

Representatives and heads of think tanks and research centers are also expected to show up at the international forum, including from Zimaity’s ECFA, which was founded 20 years ago and currently is one of the most prominent think tanks in Africa and the Middle East.

ECFA’s studies and recommendations are constantly passed on to the Egyptian Ministry of Foreign Affairs to be considered by decision makers, said Zimaity, noting that the institution is in constant communication with all state ministries.

ECFA has relations with several think tanks in China, including those in Beijing, Shanghai, Nanjing and other cities, and representatives exchange visits and engage in discussions about each BRI development stage, he said, adding that he hoped this year’s Belt and Road forum could establish a mechanism that gathers researchers in BRI states to share their studies, views and visions.

“All the recommendations raised by ECFA urge Egypt to further engage in the BRI and utmost cooperation with China in the light of the initiative,” he added.

(The video on the BRI summit is courtesy Xinhua)