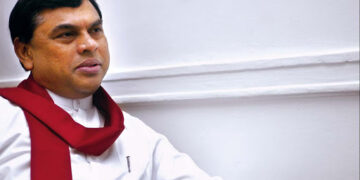 Colombo June 26 (Daily Mirror) – Basil Rajapaksa will enter Parliament next month after he is sworn in as a national list MP, political sources confirmed to Daily Mirror yesterday.

After he takes his oaths as a parliamentarian, Rajapaksa is likely be sworn in as the Minister of Finance and Economic Development.

Presently the Finance Ministry portfolio is being held by Prime Minister Mahinda Rajapaksa.

According to sources, Basil is likely to be sworn in as an MP on July 6 after MP Ranjith Bandara resigns, for him to take the seat.

The Daily Mirror learns, that economist Ranjith Bandara is tipped to be appointed in a high position at the Central Bank of Sri Lanka after he steps down from his seat as a Member of Parliament.