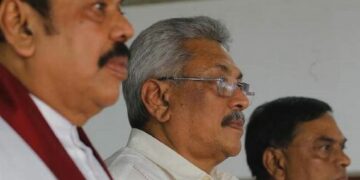 Colombo, July 9 (Daily Mirror) – Basil Rajapaksa was sworn in as the Minister of Finance and the legal framework of the ministry under him is given below:

Prime Minister Mahinda Rajapaksa, was sworn in as Minister of Economic Policies and Plan Implementation.

The younger brother of President Gotabaya Rajapaksa and Prime Minister Mahinda Rajapaksa, Basil Rajapaksa yesterday took oaths as the new Finance Minister, after weeks of a tussle within the Rajapaksa brothers and families.

Basil, who is a half American as he holds dual citizenship, also took oaths as a national list MP from the ruling SLPP as the 20th amendment clearly paves way for dual citizens to contest elections as well as hold parliamentary seats.

Basil, who is now the new Finance Minister, took over the portfolio from Prime Minister Mahinda Rajapaksa, who in a switch was sworn in as the Minister of Economic Policies and Plan Implementation which was a new Ministry gazetted by the President yesterday. According to the gazette, 10 departments, statutory institutions and public corporations come under the new ministry.

The Daily Mirror learns that Basil received the portfolio from the Prime Minister following weeks of intense discussions between the brothers and also faced objection from the Prime Minister’s sons. Basil had requested for the Finance Ministry but this had been objected by Mahinda Rajapaksa and even within some in the government but in the end Basil was handed the portfolio once the new ministry was created.

On September 7, 2020, the Daily Mirror had exclusively reported that if the 20th amendment was passed, Basil had no immediate plans to enter Parliament despite heavy speculation back then that he was to take oaths immediately as an MP and Cabinet minister following the passing of the new amendment. In the same article, the Daily Mirror also reported that Prime Minister Rajapaksa was likely not to complete his full term in office and it is likely that another Rajapaksa brother would take over his duties.