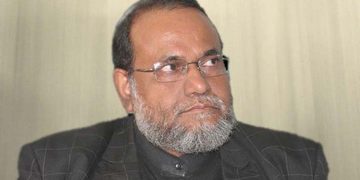 Mir Quasem Ali, Jamaat leader and financier who was executed on September 3 for war crimes committed in 1971.

Dhaka, September 3 (NIA): Mir Quasem Ali, Jamaat-e-Islami’s key financier and a notorious Al-Badr leader of Chittagong during the 1971 Bangladesh liberation war, was hanged Saturday night at the Kashimpur Central jail for crimes committed against humanity during the war.

The body is to be buried in Manikganj. Quasem Ali was the sixth war criminal to be hanged in Bangladesh. The Jamaat-e-Islami has called for a country-wide Bandh or hartal on Monday.

Earlier, his wife Kandkher Ayesha Khatun, who met him in the death row said he was prepared to die and his two daughters said he would become what he always wanted to be, a “martyr.”

Officially, Quasem was executed for the murder of a freedom fighter at the Dalim Hotel in Chittagong in 1971.The well to do businessman had been a financier of Islamic terrorists in Bangladesh after collaborating with the Pakistani armed forces in 1971 when Bangladeshi nationalists were fighting for independence from Pakistan.

He is the last  top line war criminal to be tried and sentenced to death by the International Crimes Tribunal set up by the Sheikh Hasina government.

The area had been put under lockdown. All shops and establishments were shut down. A huge number of the elite force Rapid Action Battalion (RAB) and other forces were deployed in the area.

Quasem had earlier rejected his last straw – the provision of Presidential mercy – that could have saved him from the gallows. But he would have had to own up the charges prior to seeking a Presidential pardon, something he refused to do..

After trial in the International Crimes Tribunal, an appeal in the Supreme Court and a review against apex court’s verdict, Quasem mounted the gallows for one substantive charge – the killing of freedom fighter Jasim Uddin at Dalim Hotel in Chittagong.

Before him, four top leaders of Jamaat, the party that opposed Bangladesh’s birth in 1971, were hanged for war crimes. A Bangladesh Nationalist Party (BNP)  leader had also been hanged. . All Jamaat leaders, except Ali Ahsan Mohammad Mujaheed, had refused to beg for mercy.

According to Dhaka Tribune, Quasem’s notoriety during the 1971 liberation war had earned him the nickname “Bangali Khan”, implying that he was as ruthless as his cruel brethren from Pakistan

His daughters say their father’s execution will only make him a “martyr” — a rare honor — and result in “irreparable loss” for Bangladesh.

In a Facebook post, Quasem’s daughter Sumaiya Rabeya said her father was a soft-hearted person who would cry every time he made a speech.

But  the “soft-hearted” Quasem was instrumental in setting up the notorious al-Badr militia, which along with other vigilante groups like Razakars and al-Shams perpetrated war crimes during the Liberation War  of 1971 . These local collaborators assisted the Pakistani occupation forces thwart the liberation forces.

His other daughter Tahera Tasnim asked everyone to pray for her father so that he may be granted a place in Ferdous, the highest of all heavens. She said her father’s execution would be an irreparable damage to Bangladesh’s economy and service sector and prayed that the country may recover.

Quasem had spent a huge sum of money in a bid to make the war crimes trials controversial. He went to the extent of hiring a lobby firm in Washington DC and paid them hefty amounts though his brother Mir Masum Ali. He tried to bribe witnesses and when he failed, his men threatened them, prosecutor Zead Al-Malum claimed.

Among the founders of Ibn Sina Trust, Mir Quasem also has stakes and equity in Islami Bank and the Keari Group. Together, these conglomerates are said to be among the organizations that sustain the Jamaat.

War crimes suspects were brought to trial after the Sheikh Hasina’s Awami League  government set up the International Crimes Tribunal in 2010. Most of the convicts have so far been from Jamaat, a party that openly opposed Bangladesh’s independence.

The Jamaat claims that the tribunal falls short of international standards and accuses the Sheikh Hasina government of carrying out a political vendetta — a charge the government denies, Dhaka Tribune reports.