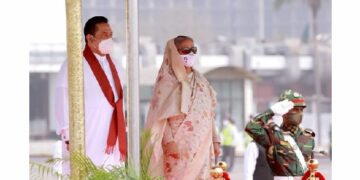 Colombo, June 4 (newsin.asia): Bangladesh’s currency swap agreement for US$ 250 million with Sri Lanka will be completed by July, the Dhaka-based The Daily Star said quoting a top official of Bangladesh Bank (BB).

LIBOR, the acronym for London Interbank Offer Rate, is the global reference rate for unsecured short-term borrowing in the interbank market and acts as a benchmark for short-term interest rates. This week, the three-month LIBOR is 0.14 percent and the six-month LIBOR 0.18 percent.

A total of US$ 250 million would be provided on the deal set in motion during Sri Lankan Prime Minister Mahinda Rajapaksa’s Bangladesh visit in March.

By July, all the necessary documents would be signed and the amount given to Sri Lanka, the official told The Daily Star yesterday, seeking anonymity due to the sensitivity of the matter.

The Central Bank of Sri Lanka (CBSL) will hand over an equivalent amount of its currency, which depreciated about 7 percent against the US dollar this year. Each dollar traded for SLR 197.9, according to the CBSL.

The BB will open an account with a bank in the South Asian country to keep the sum, which will be around 49.5 billion Lankan rupees, the BB official said. The amount would be used for import payments, the high-up pointed out.

This currency swap agreement is a good deal for the BB, which has a record US$ 45 billion in its coffers, according to the official. “All our investments right now bear interest of less than 1 percent, whereas this is paying more than double of what we get,” the official said.

The injection of Dollars from Bangladesh would be a great relief for Sri Lanka, which has US$ 3.7 billion of foreign debt maturing this year. It had about US$ 4 billion in foreign currency reserves at the end of April. The coronavirus pandemic has deprived Sri Lanka – whose economy contracted 3.6 percent in 2020, its worst growth performance on record – of important sources of foreign currency such as tourism and exports.

Its US$ 4.5 billion tourism industry, which was already reeling from the 2019 Easter Sunday bombings that killed 279 people, was hit particularly hard, while its exports were down by about 17 percent in 2020. The Sri Lankan Government anticipated such a situation soon after the Coronavirus began to put down its roots all over the world, and Colombo imposed import restrictions on non-essential items from March last year. Subsequently, it is hunting for dollars to shore up its reserves, which is enough to cover import bills for about three months.

So far, Colombo has managed a 10-billion-yuan (US$ 1.5 billion) currency swap with China and a US$ 500 million loan from South Korea, other than the deal with Bangladesh.

It has also applied for US$ 780-800 million under the Special Drawing Rights (SDR) facility of the International Monetary Fund (IMF).

Bangladesh’s import bill with Sri Lanka is US$ 50-55 million a year, the official said.