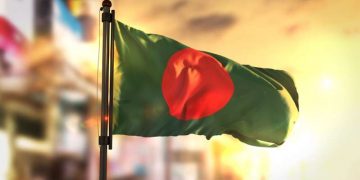 September 13 (The New Nation) – Bangladesh has regained its position as the top country in sending troops in the United Nations’ peacekeeping missions.

The country has sent total 6,731 peacekeepers to the UN peacekeeping operation regaining the first place among countries across the world, read a press release issued by the Inter Services Public Relations Directorate on Saturday.

Nepal, India and Pakistan have been in fourth, fifth and sixth places respectively with Nepal has 5,682 peacekeepers, India has 5,353 and Pakistan has 4,440 in total.

Bangladesh first deployed uniformed personnel to serve with the organisation in 1988 when they were deployed to help monitor the armistice between Iran and Iraq. The name of the first operation Bangladesh took part was UNIIMOG. Bangladesh also participated in another peacekeeping operation in Namibia called UNTAG in the same year.

In November last year, the Bangladesh Police received the Best Police Unit Award for its contribution to the United Nations peacekeeping operations.

The Bangladesh Formed Police Unit (FPU) Rotation 11 was awarded for providing security to the Nyala Super Camp in South Darfur in Sudan and its commendable work on capacity building of Sudan’s police.