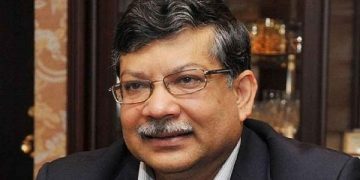 By The Diplomatic Correspondent/Prothom Alo

Dhaka, August 24: Foreign Secretary Masud Bin Momen on Monday said that the government is planning to relocate the first batch of Rohingya from Cox’s Bazar to Bhashan Char after the monsoon.

He said this at a webinar organized by the Center for Peace Studies (CPS) of the South Asian Institute of Policy and Governance (SIPG) at the North South University in Dhaka.

The Bangladesh foreign secretary rejected the notion of local integration of forcibly displaced Rohingya people of Myanmar in Bangladesh.

‘The Bangladesh government rejects any notion of local integration of the Rohingya people in Bangladesh,” he said.

The webinar titled ‘The Rohingya Crisis: Western, Asian and Bilateral Perspectives’ was organised on the occasion of the third year of the latest influx of minority Rohingya people of Myanmar to Bangladesh since 25 August 2017. Experts from home and abroad participated in the discussion chaired by North South University vice-chancellor Professor Atiqul Islam.

Dwelling on the issue of relocating a portion of Rohingya from Cox’s Bazar to Bhashan Char, Masud Bin Momen said, “We will soon conduct a go-and-see visit for relatives of sheltered Rohingyas and other representatives. If they find the place better than the cramped camps in Cox’s Bazar, we expect to commence initial transfer of Rohingyas thereafter the monsoon season. UN teams are expected to visit Bhashan Char and prepare the UN system’s assistance response. We may also arrange the visit of human rights groups and select media to appreciate the facilities created.”

The government is working on extending educational facilities for Rohingya children from Grade 6 to 9 in Myanmar curriculum and skills training for young members of the community so that they can maintain livelihood after returning to their ancestral home in Rakhine at the earliest, the foreign secretary said.

Referring to Myanmar’s non-responsive attitude to resolve the crisis, the Bangladesh foreign secretary said, “Myanmar has utterly failed to demonstrate any political will to create a conducive condition in Rakhine. In the recent months, we rather notice growing reluctance on the Myanmar side to continue bilateral engagements with Bangladesh. Creation of conducive conditions for the voluntary return of Rohingya is intricately related to political, security, economic and social factors.”

ASEAN, in which Myanmar is also a member, has not taken any meaningful step as there is a high level of tolerance and unwillingness to discuss the Rohingya crisis in ASEAN mechanisms, he said.

Former Foreign Secretary Mohammad Shahidul Haque, now a Senior Fellow of SIPG, said Bangladesh should consistently and coherently pursue “hybrid diplomacy” involving bilateral, regional and multilateral pathways anchored in accountability and justice for resolving the Rohingya crisis with ensuring sustainable repatriation of the members of the community to Myanmar.

North South University vice chancellor Professor Atiqul Islam said, in his remarks as chair of the session, resolving Rohingya crisis at the earliest is essential for peace and stability in the region.

Moderated by Dr Ishrat Zakia Sultana, associate professor of the CPS, Dr M Jashim Uddin gave a vote of thanks at the webinar.

Several members the Rohingya community participated in the session and presented questions for the discussants on the need of education for the young people in camps in Cox’s Bazar.

Over 860,000 Rohingya people crossed the border with Bangladesh in the last influx that began on 25 August 2017 amid atrocities committed by the Myanmar military and its extremist cohorts.

Bangladesh has been hosting more than 1.1 million Rohingya people for years as two attempts to launch the repatriation failed since the signing of agreements with Myanmar about three years ago on sending them back to their home in Rakhine.