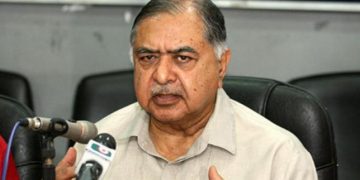 Dhaka, January 12 (The Daily Star): The Jatiya Oikya Front Convener Dr Kamal Hossain  said here on Saturday that it was a mistake to take part in the December 30 national elections with Jamaat-e-Islami as an ally.

“In my view, taking part in the December 30 national election keeping Jamaat in the alliance can be called a mistake,” Kamal Hossain said while addressing a press conference at the party’s Arambagh central office in Dhaka.

Claiming that he did not know about the participation of 25 Jamaat-e-Islami men in the 11th parliamentary election, Kamal said:  “I publicly said that there was no Jamaat man in the Oikya Front and no one told me anything in this regard. I made my stance clear when I heard (about Jamaat’s participial in polls). In my view, it can be called a mistake.”

“Pressure can be mounted on BNP (Bangladesh Nationalist Party) to cut ties with Jamaat,” the veteran jurist said.

Responding to a query over what he would do if BNP does not sever ties with Jamaat, Kamal said, “I never thought of doing politics along with Jamaat and will not do so in future.”

The Jatiya Oikya Front and BNP-led 20 party alliance secured a total of eight seats in the December 30 national elections out of 299 seats.

As a political partner of the BNP-led 20-party alliance, 25 leaders of Jamaat-e-Islami took part in the election with BNP’s electoral symbol “Sheaf of Paddy”, but were not able to secure a single seat.

Land Minister Saifuzzaman Chowdhury on Saturday asked all government staff and officials of the land office to submit their wealth statements by February 28.

Speaking in Chattogram,  Saifuzzaman said  he would issue a gazette notification to make the order effective immediately.

All land offices will be brought under the purview of the CCTV coverage to ensure transparency in the sector, he said.

Apart from this, land offices will be equipped with voice recorders to oversee the activities of the officials, he added.

(The featured image at the top is that of Dr.Kamal Hossain)