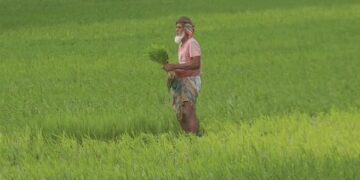 Colombo, June 28: Bangladesh, which has made a success of agriculture in the South Asian region, could be the model Sri Lanka should adopt for its fertilizer policy. To an appreciable extent Bangladesh has succeeded in regulating the use of chemical fertilizers while promoting the use of organic fertilizers. In other words, it has devised means to use both in a judicious manner to safeguard the environment while ensuring that agricultural production does not fall.

Bangladesh has been making vigorous efforts to motivate farmers to use organic farming given the environmental and health hazards associated with chemical fertilizers and pesticides. But the “Go Organic” movement has not really taken off.

A case study by Dr. Shaikh Tanveer Hossain on organic farming published in orgprints.org reveals that the availability of organic fertilizer has not kept pace with increases in farm area and farming intensity. “This is because high yielding seeds, chemical fertilizers and pesticides are more easily available and farmers use credit to purchase these,” Dr.Hossain says.

Furthermore, landless and smallholder farmers depend on sharecropping, which forces them to maximize the short-term benefits accruing from using chemical fertilizers and pesticides, he adds.

Judicious Use of Chemical Fertilizers

In fact, yields have increased marginally, the authors point out.

Islam and Beg further say that these results are also due to the farmers’ decision to delay the application of fertilizers until later in the production process because returns on urea application were lower earlier in the planting cycle. Over use of fertilizers or using them at the wrong time could be disastrous, they point out.

“Innovative technologies, which provide farmers with plot-specific information on when to apply nitrogen fertilizers, offer a simple solution to fertilizer overuse,” they say.

Urea, a nitrogen-based fertilizer, is the most used fertilizer in Bangladesh. Compared to other fertilizers, urea is particularly challenging to use, “because the timing of the applications is crucial to respond to nitrogen deficiencies at critical times in the production process.”

Farmers can identify the crop’s nitrogen requirements by the color of its leaves.

“In the controlled experiment conducted by the researchers, program farmers increased their rice yield by about 1.8 kilograms per forty square meters of land. For farmers with an average plot holding, this meant an increase in revenue of about US$ 22.30. Researchers interpret the increases in yields as evidence that overall productivity improved.”

“A possible explanation could be that farmers shifted fertilizer application to a period in the planting cycle where applying fertilizer had a high return, which allowed them to use less fertilizer overall. The program was cost-effective when applied over two or more seasons.”

“And assuming no change in yield, every US$ 1 spent on the intervention would generate a return of US$ 1.80 through urea savings over two seasons and US$ 2.80 over three seasons,” the authors point out.

As far as the Sri Lankan scenario is concerned, the government has stopped the import of chemical fertilizers citing health and environmental reasons as well as the severe foreign exchange shortage created by the on-going economic downturn.

The government has rejected experts’ pleas for a “step by step” approach to the change-over or the adoption of a mixed chemical-organic fertilizer use policy. It has ignored the argument that an overnight change would be impossible to implement and that the change-over itself would hurt agriculture instead of fostering it.

The Sri Lanka Agricultural Economics Association (SLAEA) had warned that a complete switch–over will result in a 25% fall in paddy yield and the profitability of paddy farming will be reduced by 33%. Coconut yield will be down by 30%. But a mixed conventional-organic system will increase paddy profitability by 16%.

A complete switch–over at this juncture will see tea productivity going down by 35%, and tea export will decline from 279 million kg to 181 million kg.

In their paper on the world organic farming scene in the journal Review of Resource Economics (October 2018), Eva-Marie Meemken and Matin Qaim of Gottingen  University, Germany have said that across all crops, the gap in the yield of organic agriculture ranges between 19 and 25%.

Organic fertilizers are found to be limited in nitrogen and phosphorus. The release of plant-available nitrogen from organic sources is slow and can often cannot keep up with the nitrogen demand during peak crop growth periods. Organic systems are also more susceptible to pest outbreaks because of the ban on the use of chemical pesticides.

Since chemical weedicide cannot be used in organic farming, weeding has to be done one manually. It is both labor-intensive and expensive.

Production costs in organic farming is higher. On an average, organic products are 50% more expensive than conventional products, the authors say. Therefore, the universal goal of giving the masses food security will not be achieved.

Sri Lankan soil scientist Dr.Warshi S. Dandeniya and her collaborator Serene Caucci, say in their paper: Composting in Sri Lanka: Policies, Practices, Challenges, and Emerging Concerns (www.link.springer.com) that organic fertilizers are not as clean and non-polluting as claimed. They could also pollute the soil.

They point out that organic fertilizers commonly called ‘compost’ could  be carriers of potentially toxic trace elements.  “The progressive accumulation of toxic trace elements such as lead and cadmium in soils has been reported in several studies where there has  been a long-term application of compost produced from Municipal Solid Waste (MSW).  Poultry litter/manure is a source of antibiotic resistance determinants and, therefore, imposes a silent threat to environmental quality and health. And night soil (human faeces) could also get mixed up with organic fertilizer,” the scientists say.

Generally the application of compost technology has not been very successful in Asian cities because segregation of ‘waste-at-source’ is poor in these cities, the authors say. The raw garbage here is full of contaminants such as heavy metals, glass, inert materials, and plant and animal pathogens. Larger scale composting plants receive a large volume of mixed waste with contaminants, the authors point out.