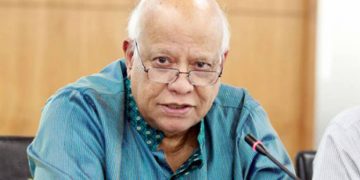 Dhaka, January 17 (The Daily Star): Bangladesh Finance Minister AMA Muhith on Tuesday said that China Harbor Engineering Company (CHEC) Limited has been blacklisted for offering bribes to government officials and would not get any contracts in the future.

The government will investigate ongoing projects where the Chinese company is involved, he added.

The company had previously got the contract for expansion of the Dhaka-Sylhet Highway.

Replying to a question whether the company was blacklisted, Muhith said, “Blacklisted. Of course.”

Queried on whether CHEC will be able to do other works in Bangladesh in future, he replied, “No, No. They can’t.”

Regarding other projects the company is already involved in, the Finance Minister said, “Let’s see what can be done. Normal rule is blacklisted means blacklisted.”

When asked whether the company offered bribes to government officials to get the contract or to increase the amount for work, Muhith  said, “They have already got the contract. I think [they offered bribes] only to please [officials] so that they [company] can misappropriate money.”

About punishing the officials who were given the bribe, he said, “No, certainly not. Because, they [the company] offered it to the Secretary and the Secretary gave it to us.”

When asked who the secretary is, he replied, “Communication [roads transport and bridge ministry] Secretary.”

Queried about the amount of the bribe, the Finance Minister said, “I forgot the amount. May be Ta 50 lakhs (5,000,000 million).” He, however, did not mention the currency used.

He also said they were proud of the Secretary road Transport for his action.

Contacted, MAN Siddique, who had gone on leave preparatory to retirement as the secretary of Road Transport and Bridges Division last October, said: “You better talk with the incumbent secretary.”

The Daily Star could not reach the incumbent secretary Nazrul Islam.

On Monday, the Finance Minister had said: “[The expansion of] Dhaka-Sylhet highway, somehow, we had to drop it. Because, the party who got the contract, they came up, in the very beginning, with an offer of bribe, open bribe.”

“So, we gave the money, which they gave to some of our officials, back to the Chinese embassy and naturally blacklisted the company.”

The government decided to fund the expansion work of the 226 km Dhaka-Sylhet road to a four-lane highway on its own, Muhith added.

Bangladesh and China signed a memorandum of understanding during the Chinese president’s visit to Bangladesh in 2016.

Under the deal, China had promised to give soft loans of $21.5 billion for 26 projects, including the Dhaka-Sylhet four-lane highway project.

China also selected China Harbor Engineering Company Limited for the project and asked Bangladesh to sign a commercial contract with the company.

Soon, the negotiation process started between the company and the Roads and Highways Department (RHD), finance ministry sources said.

Bangladesh estimated Tk 100,000 million as the cost of the project but China Harbor demanded near about Tk 200,000 million, they said.

The Bangladesh government planned to sign loan agreements for eight of the 26 projects with China’s Exim Bank within 2017.  This project was one of them; but the loan agreement for it was not signed, sources added.

Earlier, the government on October 9, 2016, signed a primary deal with China Harbour. RHD Chief Engineer Ibne Alam Hasan and the company’s Vice-president Tang Qiaoliang signed the agreement at a hotel in Dhaka.

On September 21, 2016, the cabinet committee on economic affairs approved RHD’s proposal, allowing China Harbor to carry out the project.

China Harbor is one of the few Chinese companies to establish good relations with some local firms and government officials.

Arriving in Bangladesh in early 1990s, this firm now uses its local connections to get projects. It even has the ability to increase costs in the middle of a project’s implementation, some contractors and sources in RHD told The Daily Star.

“They [China Harbour and their local agents] are smart and well-connected. They can easily reach a minister or an influential figure in the government in a bid to get contracts,” said the owner of one of the country’s largest construction firms, requesting anonymity.

He said agents of the companies regularly visit ministries and meet officials. “You can also find them at the RHD office, trying to woo officials.”

But Additional Chief Engineer of RHD Abul Kashem Bhuiyan, who is involved in Dhaka-Sylhet expansion project, denied any malpractice in the project.

“It is beyond my knowledge. Nothing like that [bribing] happened here. It may happen somewhere else,” he told The Daily Star.

According to him,  the Chinese firm demanded far more money than what RHD had estimated for the expansion work.

“We calculated every cost keeping in mind inflation and price escalation of materials, but the company came up with such a rate that was not acceptable,” he explained.

The Daily Star repeatedly tried to speak to the RHD Chief Engineer but he did not respond to calls or texts.

(The featured image at the top is that of the Bangladesh Finance Minister AMA.Muhith)