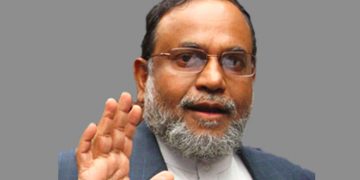 Dhaka, September 4 (NIA): Bangladesh on Sunday asked Pakistan not to interfere in the trial and execution of “war criminals” pertaining to the 1971 liberation struggle which culminated in the separation of East Pakistan from West Pakistan to form Bangladesh.

Pakistan had officially questioned the quality of the trial process, reminded Bangladesh of the 1974 Tripartite Treaty to give amnesty to collaborators and also sent a condolence message to the family of the executed man.

Protesting against Pakistan’s reaction to the execution of condemned 1971 war criminal and Jamaat-e-Islami leader Mir Quasem Ali, Bangladesh said that Islamabad’s reaction is a direct interference in the country’s domestic affairs.

Additional Foreign Secretary for Bilateral Affairs Kamrul Ahsan  said, “The opinion that Pakistan gave over the execution of Mir Quasem Ali was entirely tantamount to interference in Bangladesh’s internal affairs.”

“We have told the envoy that Quasem had scope to appeal against the judgment and he exhausted the scopes. The apex court thought he deserved the punishment what he was handed down as he took part in the genocides in 1971,” Ahsan said.

He said that Dhaka told Islamabad that Quasem’s trial “took place in a very transparent manner in front of everybody”.

Mir Quasem Ali was hanged on Saturday at 10.30 pm  for committing crimes against humanity during the Liberation War of Bangladesh in 1971.

A statement released by the External Affairs Ministry of Pakistan condemned the execution and said,

“Pakistan is deeply saddened over the execution of the prominent leader of Jamaat-e-Islami, Bangladesh, Mir Quasem Ali, for the alleged crimes committed before December 1971, through a flawed judicial process,” reads the statement.

It offered the deepest condolences to the bereaved family.

The statement also said: “The act of suppressing the Opposition, through flawed trials, is completely against the spirit of democracy. Ever since the beginning of the trials, several international organisations, human rights groups, and international legal figures have raised objections to the court proceedings, especially regarding fairness and transparency, as well as harassment of lawyers and witnesses representing the accused.

Pakistan also called upon the Bangladeshi Government to uphold its commitment as per the Tripartite Agreement of 1974 wherein it was “decided not to proceed with the trials as an act of clemency”.