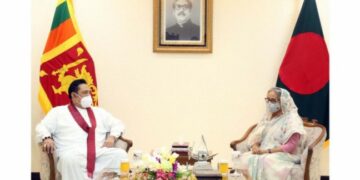 The first one is signed afresh while the remaining five were renewed through today’s signing.

The MoU on cooperation for strengthening youth development between Bangladesh and Sri Lanka was signed by State Minister for Youth and Sports and Sri Lankan State Minister of Rural Housing and Construction and Building Material Industries Ministry Indika Anuruddha.

Yet, another MoU on Cooperation for Training of Bangladesh Nurses and Health Care Workers in Sri Lanka was signed by Health Minister Zahid Maleque and Sri Lankan State Minister for Money and Capital Market and State Enterprise Reforms Ministry Ajith Nivard Cabraal.

The MoU on Cultural exchange Programme between Bangladesh and Sri Lanka for years 2021-2025 was signed Cultural Affairs Secretary Badrul Arefin and SL secretary to the Prime Minister Gamini Sedara Senarath.

The MoUs were signed after bilateral talks between Bangladesh and Sri Lanka that took place at the Prime Minister’s Office.

Bangladesh and Sri Lanka today agreed to deepen their cooperation in various sectors, especially exploring newer avenues in trade and commerce, as the bilateral trade of the two countries is much lower than its potential.

PM’s press secretary Ihsanul Karim briefed reporters after the meeting. He said the entire range of bilateral, regional and international issues were discussed at the official talks that lasted for nearly an hour.

Sheikh Hasina said the bilateral trade is far less than its potential and mentioned that the joint feasibility study for a free trade agreement has been done. “Now we should go for the early conclusion of FTA,” she said emphasising the importance of facilitating greater private sector participation.

She mentioned that Bangladesh has many products which have high prospects in Sri Lankan market. The Prime Minister said that Sri Lanka has investment in the power sector of Bangladesh. “We encourage Sri Lankan investors to invest more in our special economic zones, and industrial and high-tech parks.”

She said Bangladesh will encourage the Sri Lankan business community to increasingly utilise the opportunities of value addition in Bangladesh’s agriculture sector. Bangladesh will be happy to share its experiences in agriculture, particularly in rice farming and fresh water fisheries, Hasina added.

“We would like to obtain technical knowhow from Sri Lanka in coastal, aquaculture, marine culture, and deep-sea fishing,” she said.

About education sector, she said, “We should have more institutionalised cooperation in capacity building, vocational training, and skilled development.”

About the health sector, the Prime Minister put emphasis the need for more training of Bangladeshi nurses and other health professionals in Sri Lanka.

“Sri Lanka may benefit immensely by importing our world-class pharmaceutical products and medical devises in greater quantities,” she said adding that this would require the simplification of Sri Lankan registration procedures.

She said Bangladesh would be happy to share with Sri Lanka its long experience in emergency response, disaster management, climate adaptation and mitigation.

Ihsanul Karim said Sheikh Hasina in her concluding remarks described the meeting as fruitful and said the existing institutional mechanism should regularly meet to take forward the relationship. “Both sides should also take immediate action for due implementation and follow up on all bilateral instruments signed so far.”

Hasina said Bangladesh values its relationship with Sri Lanka and mentioned that the 50th anniversary of the establishment of diplomatic relations with Sri Lanka will be held next year.

He praised Bangladesh’s digital transformation and its performance and said they would be happy to share Bangladesh experiences in agriculture, health and education issues for mutual benefits.

Laying emphasis on increased trade and its diversification, Rajapaksha sought more attention to tariff preference and said his country will invest more in the private sector business areas.

He sought measures to make easier of the repatriation of profits and praised the concept of blue economy of Bangladesh and said that Sri Lanka is ready to share its experiences in this regard.

The visiting Sri Lankan prime minister showed his respect to Bangabandhu by placing a wreath at his portrait on the premises of Bangabandhu Memorial Museum at Dhanmondi road-32 this morning.

After placing the wreath, Rajapaksa stood there for some time in solemn silence as a mark of profound respect to the memory of the architect of the country’s independence.

He also signed the visitors’ book.

“I’m deeply touched and moved by this sacred space so much venerated by the people of Bangladesh and all the peace-loving people the world over,” he wrote in the visitors’ book.

“The tragedy of Bangladesh that took place at this place on August 15, 1975, in many ways symbolizes the courage and strength it infused in to the people of Bangladesh to protect and cherish the freedom for which Bangabandhu sacrificed his valued life,” he also wrote.

“May this be an eternal tribute to all those who respect life and freedom,” he mentioned.

The success of Bangladesh and its people is the best honour to the name of Bangabandhu Sheikh Mujibur Rahman, Sri Lankan Prime Minister Mahinda Rajapaksa said.

“Bangladesh continues to flourish … It is an economic powerhouse in South Asia. That’s the best honour to the name of Bangabandhu,” he said at the twin celebrations of Mujib Borsho and the golden jubilee of Bangladesh’s independence at the National Parade Ground yesterday.

He joined the event as the guest of honour, after arriving in Dhaka earlier in the day on a two-day visit.

Rajapaksa said Bangabandhu was a person of principle who dedicated his whole life for the people of this land. He was determined to establish an independent nation, but unfortunately, his and most of his family members’ lives were cut short.

“Today, under the leadership of Prime Minister Hasina, daughter of Bangabandhu, Bangladesh is flourishing,” he said yesterday, which was the third day of the 10-day celebrations.

Rajapaksa is the second world leader to have joined the celebrations after the Maldives President Ibrahim Mohamed Solih. Rajapaksa landed at Hazrat Shahjalal International Airport around 10:00am and was welcomed by PM Hasina.

Addressing the event, he said he was delighted to have joined the occasion that has historic significance and thanked Prime Minister Hasina for the cordial invitation and welcome. He said he brings the message of solidarity from the Sri Lankans.

Stressing that the people of Bangladesh and Sri Lanka have a long historic tie through maritime routes, he said the tie has now become even stronger. Sri Lanka is also one of the first countries to establish diplomatic relationship with Bangladesh.

He said Sri Lanka stands by Bangladesh. Both the countries are striving to eradicate poverty, improve blue economy, trade and commerce.

The Sri Lankan PM said Bangladesh has made great strides in agriculture and has even provided training through Saarc Agriculture Centre to the neighbours. “Bangladesh’s journey of eradicating poverty is inspiring.”

Hasina expressed gratitude to the Sri Lankan PM for joining the programme, saying this reflects the friendship the two countries have.

Bangladesh and Sri Lanka take similar position on issues in the international forums and support each other. “We hope this friendship will continue.”