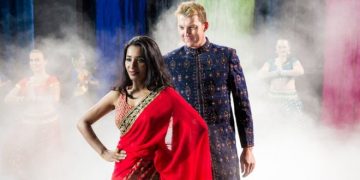 Aug 11 – One of the fastest bowlers in cricket history has made an unlikely career move – starring in a romantic comedy.

The film UnIndian was shot in Sydney and will open across 300 screens on the cricket-mad sub-continent after a red-carpet premiere on 19 August.

Lee – who is hugely popular in India – told the BBC that he has always seen himself as something of an actor.

“On the cricket field I’m totally different on the field to what I am off the field,” Lee said.

“It came naturally to be in front of the camera.”

Since his playing days, Lee has built a presence in India – appearing in a string of TV commercials and even releasing a music single.

He also established some Bollywood connections playing in the Indian Premier League – playing under Shah Rukh Khan for the Kolkata Knight Riders and Preity Zinta for the Kings XI Punjabs.

The cricket star was offered the leading role in the £2.6 million (US$3.4m) film after meeting with the director over a cup of coffee.

In the film, Chatterjee plays a divorced single mother with a career whose family want her to find “a nice Indian man”.

Instead she meets Lee’s character, who may be nice but is definitely not Indian.

“She’s an absolute sweetheart to work with, a consummate professional,” Lee said.

The Bollywood star even coached the former Test cricketer through the film’s bedroom scenes.

“It’s embarrassing but she made me feel very comfortable and it was done in a very tasteful way,” Lee said.

Although tame by western standards, the sequence was re-edited at the request of India’s censorship board.

A letter from the board requests for the: “Sex scene to be shortened and toned down, especially removing the sideways visual and end climactic shot.”

It was a restriction that frustrated the director, who points out that India was the country that gave the world the Kama Sutra.

It’s a topic that makes Lee appear to choose his words carefully.

He said: “I think the best way to answer that is we did shoot it as an Australian film and it was shot by an Indian producer and director Mr Anupam Sharma who does live in Australia. The lead actress is Indian. So, I guess I’ll leave it at that.”

The cricket player acquired an appreciation for the Indian way of life, having travelled there several times a year for more than a decade.

The film opens on hundreds of screens across India next week, followed by a release in the Middle East and the US.

As for Lee, his cricket career is over. Will a second innings in show business follow?

“If people enjoy watching me and Tanishtha in UnIndian and they like what they see, well then, who knows what might happen?”