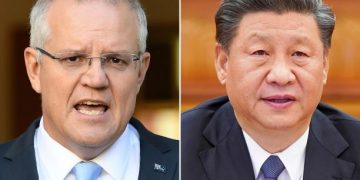 National security issues have led to threats of economic sanctions

by Editor
in Around The World, China, Diplomacy, Recommend
Reading Time: 5min read
1 0 In 2016, the then Australian Prime Minister, Malcolm Turnbull, was on a State visit to China, where together with Chinese President, Xi Jinping, the Sino-Australian bilateral relationship was officially described as a ‘comprehensive strategic partnership’.

The previous year, a Free Trade Agreement (FTA) was signed, after which a delegation of 1000 Australian businesspersons toured China to scout for new opportunities in the wake of an increased market access given to Australians. Trade between the two countries was bourgeoning. China’s appetite for Australian resources, foodstuffs and service exports was so great that China became and still remains Australia’s largest trading partner.

Come 2020, there was a radical change. In response to Australian calls for an inquiry into China’s handling of the coronavirus, some beef imports were banned and barley was slapped with an 80% tariff.  Reported Chinese-sponsored cyber-attacks on Australia and Chinese accusations of Australia “interfering in China’s internal affairs” meant that the relationship became “increasingly rocky by the day” as the ABC put it.

The relationship was already beginning to falter before COVID, but the pandemic and Australia’s calls for an independent inquiry heightened Chinese ire. With stoushes over Hong Kong, cyber-security and political interference the relationship is possibly at its chilliest today.

Roots Of The Conflict

How did relations get to this point, and, importantly, can they recover? Or will relations continue to sour?

The foreign interference laws were passed shortly afterward, and in June 2020 another MP’s home was raided under those laws on allegations of Chinese interference.

In 2018, Huawei was banned from participating in Australia’s 5G rollout on fears of national security. As reported by the ABC, the government declared that Huawei’s links to the Chinese Communist Party (CCP) and its requirement to assist Chinese State intelligence was a violation of Australian law. This sparked accusations from the Chinese Foreign Ministry that Australia was using ‘excuses to artificially erect barriers’.

On April 19, 2020, the Foreign Affairs Minister Marise Payne announced a push for an independent investigation into the origin and spread of the coronavirus. A sharp retort from the Chinese Foreign Ministry labelled the push as motivated by ‘bigotry’ and ‘a lack of independence’ influenced by a US-led anti-China campaign.

One week later, China’s ambassador to Australia, Cheng Jingye, hinted to the Australian Financial Review that Australian tourism, education and food exports may suffer if Australia is seen as ‘hostile’ by the Chinese.

The Ambassador’s comments earned an unexpectedly sharp rebuke from the Australian government, with Trade Minister Simon Birmingham criticising the threats as ‘economic coercion’ and refusing to retract the government’s push for an inquiry.

This strong response from Australia suggested that the Chinese had overplayed their hand by threatening economic coercion. Canberra’s refusal to back down has high public approval in Australia. In a 2020 Lowy Institute poll, only 23% of Australians trusted China to act responsibly.

Amidst the friction, China banned beef imports from four abattoirs on health grounds, tariffed barley at 80% for breaching anti-dumping regulations and warned students against studying in Australia due to racist attacks. Although not officially linked to the tension, it was clear that these were acts of retribution.

An announcement that Australia had been targeted by ‘state-based’ cyber-attacks, privately hinted to be from China, further worsened relations. Since then, Hong Kong has emerged as a growing point of disagreement, with Australia tearing up its extradition treaty with Hong Kong and warning that Australians may face ‘arbitrary detention’ if they travel to Chinese territory.

For China, a growing power, any criticism tarnishes the image it has increasingly tried to portray as a “benevolent” global power, in contrast to a belligerent America.

In Australia, government data show that China is Australia’s largest trading partner, accounting for 26% of bilateral trade. Trade tension would strain export industries Australia needs for its economic recovery out of the pandemic.

However, the ABC suggests that “the view in Canberra is that clear lines must be drawn for the longer-term good…remaining silent will only encourage China to go further.” Whatever the immediate repercussions may be, “Australia has decided there’s no going back to the relationship that existed even seven years ago.”

However, Iain Henry of The Lowy Institute believes that Australian policy makers are increasingly adopting an approach that construes Chinese criticism of Australian policies as attacks on Australian sovereignty. He argues that this approach means that Australian approaches are often ‘inflexible’ because the only viable option appears to be to stand up to Chinese policies, rather than finding a mutually acceptable path forward.

Of course, this also applies in the reverse. China is placing increasing weight on its international image and any attempt to tarnish it is construed as an attack on Chinese sovereignty, Chinese policymakers do see Australia’s actions as deliberately undermining China’s sovereignty.

Mixture of Aggression And Caution

However, the Australian government is exercising caution. The announcement of extended visas for Hong Kong nationals was portrayed as an economic decision, rather than a humanitarian one, as those fearing retribution from China may still be ‘sent back’ to Hong Kong.

Nevertheless, the Sydney Morning Herald argues that an Australian ‘capitulation’ would suggest to Beijing that its economic coercion works and would justify further use in the future.

The CCP-controlled Global Times unsurprisingly takes a hawkish approach towards the possibility of relations returning to normal soon. It argues that ‘provocations’ over ‘the Hong Kong issue’ will be a ‘bitter pill’ for the Australian economy, suggesting that should Australia attract further Chinese ire, more economic pain will be inflicted.

The weaponizing of Australian exports shows Australia’s vulnerability in its relations with China, but it is also a strength for Australia. Gavin Thompson of Wood Mackenzie argues that targeting Australian minerals would hurt China’s economy, where recovery depends on massive infrastructure development highly dependent on Australian resources.

The China Iron and Steel Association in a May Global Times article acknowledges that alternate sources would take 4 to 5 years to be fully established.

Thus, despite worsening relations, it is unlikely that each country would act harshly, given how tightly bound-together their economic successes are. Former Foreign Minister Gareth Evans suggests that cooperation is too important and despite tension, economic decoupling is ‘nonsensical’ (South China Morning Post). The general view, therefore, is that Australia should neither capitulate to Beijing nor take an overly aggressive approach.