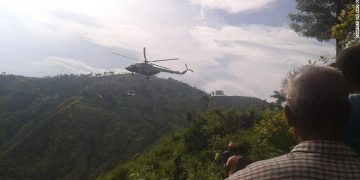 A helicopter lifts off from the mountainous site of a bus crash in Nepal. Pic Courtesy CNN

Aug 16 (NIA) – At least 33 people were killed when the bus they were travelling in skidded off the the road and plunged down a hill in Nepal’s Kavrepalanchok district on Monday evening, authorities said.
Police said the victims were travelling to their home villages in Nepal to receive the first government payments for victims of last year’s devastating earthquake.
Atleast 38 others were injured in the accident.
Police said the bus was heading to Kartike Deurali village, which was among the worst hit by the devastating eathquake last year.
The road, little more than a trail, was wide enough for only one vehicle to pass at a time and was slippery because of continuous rains.
Although the Nepalese Home Ministry said that 33 people were killed, injured passengers and relatives said many more may have died because the wreckage was scattered along the slope below the road and some areas were inaccessible.
“Bodies are scattered all over the sloppy hill, so security personnel are having difficulties collecting bodies and rescuing the victims,” Deputy Chief District Officer Bhim Kanta Sharma told local journalists.
A government spokesperson said that they were looking into the possibility of overcrowding of the bus being the cause of accident. “We can come to a final conclusion only after the investigation is over,” he said.
Police said the injured were airlifted to Nepal’s capital, Kathmandu, 70 kilometers away.