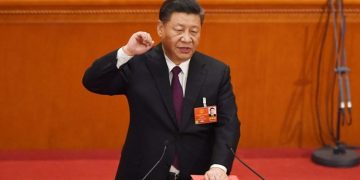 At 70, China recounts its achievements and ponders the challenges

At 70, China recounts its achievements and ponders the challenges Colombo, September 30: To mark the  70 th., anniversary of its founding, the Peoples’ Republic of China (PRC), has issued a  White Paper titled: “China and the World in the New Era” recounting its multifarious achievements and  pointing to tasks which still remain to be done before it can consider itself a First World country.

In 70 years China has become the world’s second largest economy ensuring for its 1.4 billion people “moderate all-round prosperity.” But the document admits that China remains a “developing country, with foundations that need to be further strengthened.”

“Some of the fundamentals in China remain unchanged, and therefore China is still facing a raft of severe challenges. The Chinese people still have work to do,” the White paper adds.

According to the World Bank,  at market exchange rates, China’s economy in 2018 was worth US$ 13.6 trillion, second only to the US economy which was worth US$ 20.5 trillion.

The secret of China’s success, according to the White Paper, is the choice of an independent developmental path.

“Reflecting on its reality and history, and through experimentation, China has drawn wisdom from its own culture and learned from the strengths of other cultures, both Eastern and Western. China sticks to its choice of path, but is never rigidly opposed to change; China borrows experience, but never copies unthinkingly,” the White Paper says.

China’s path is law-based governance, the document says. “Rule of law ensures a vigorous and orderly society in times of profound change, and ensures lasting peace and stability.”

China’s success boils down to the  centralized leadership of the Chinese Communist Party (CPC), the document says.

Explaining it says: “Due to China’s vast territory and complicated national conditions, the governance of China is uniquely difficult. Without centralized, unified and firm leadership, China would have tended towards division and disintegration and caused widespread chaos beyond its own borders.”

Decrying the common notion that the rise of China is a threat to the rest of the world and the established order, the White Paper says: “This is both unrealistic and harmful to regard China’s economic development as a threat or challenge and try to squeeze China out of the global industrial chain, supply chain and value chain so as to detach China from the world economy.”

Those who accuse China of being a threat should look at the market it offers to outsiders, the White Paper says. “In the coming 15 years, China’s imports of goods and services are expected to exceed US$ 30 trillion and US$ 10 trillion respectively. China is the most attractive investment destination. It has a workforce of almost 900 million, and more than 700 million are employed. It has a talent bank of 170 million people who have received higher education or vocational education, and generates more than 8 million college graduates each year.”

On Foreign policy, the White Paper’s focus is on the US. It takes a hard line even as it admits that China is not yet equal to the US and that it is still a developing country.

“The US cannot maintain its strength by attempting to contain and suppress other countries, or by transferring its own domestic stresses outward. The US should abandon the Cold War mentality, and develop a proper understanding of itself, China, and the world.”

“It should adapt to the development and prosperity of other countries, and live in harmony with the rest of the world, which is the principle major countries should always follow.”

“ The Thucydides trap (when an established power goes to war to stem the rise of a new power) is not an unbreakable law. However, any serious strategic miscalculation between major countries risks turning conflict and confrontation into a self-fulfilling prophecy.”

“For the wellbeing of the two nations and the rest of the world, China is ready to work with the US to shoulder their shared responsibilities as major countries, expand cooperation on the basis of mutual benefit, manage differences based on mutual respect, and jointly advance China-US relations focusing on coordination, cooperation and stability,” the White Paper says.

As a wannabe global power with some way to go,  China has chosen to tread the path of “multilateralism” to be able to take on a dominant power like the US and its allies.

In an interesting reference to the settlement of international disputes, the White Paper advocates a multilateral approach in place of a unilateral or bilateral approach. This could be an attempt by China to portray itself as a non-hegemon in a world of hegemons.

“China advocates that whenever differences and disputes crop up between countries, they should turn to consultation through multilateral frameworks or platforms, seek common ground while reserving differences, increase common interests while dissolving differences, and by doing so, broaden consensus,” it says.

The White paper makes it a point to stress that China does not believe in interfering in the internal affairs of other countries in a world where the Right to Protect (R2P) has become a credo of the post-colonial era powers.

“We respect the right of the peoples of all countries to choose their own development paths and social systems, respect the sovereignty and territorial integrity of all countries, and oppose interference in others’ domestic affairs,” the White Paper says.