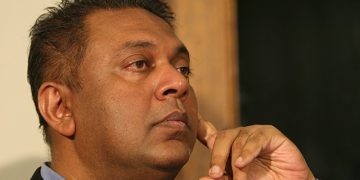 Assassination of Russia’s Ambassador to Turkey is a violation of right of all diplomats worldwide, says Sri Lanka’s FM

Assassination of Russia’s Ambassador to Turkey is a violation of right of all diplomats worldwide, says Sri Lanka’s FM Colombo, Dec 20 (NIA) – Sri Lanka, on Tuesday, condemned in the strongest terms, the assassination of the Russian Ambassador to Turkey,  Andrey Karlov, who was shot in the back while giving a speech at an art gallery n Ankara on Monday evening.

Sri Lanka’s Foreign Minister, Mangala Samaraweera said that Sri Lanka considered the attack a violation of the right of all diplomats to represent their nations peacefully, around the world.

“Shocked by the assassination of Russia’s Ambassador to Turkey. Condolences to Ambassador Karlov’s family, the government and people of Russia,” Samaraweera said in a tweet.

The Russian diplomat was assassinated at an Ankara art exhibit on Monday evening by a lone Turkish gunman shouting “God is great!” and “don’t forget Aleppo, don’t forget Syria!” in what the leaders of Turkey and Russia called a provocative terrorist attack, the New York Times reported.

The gunman, described by Turkish officials as a 22-year-old off-duty police officer, also wounded at least three others in the assault on the envoy.

The assassination, an embarrassing security failure in the Turkish capital, forced Turkey and Russia to confront a new crisis tied directly to the Syrian conflict, now in its sixth year.

President Vladimir V. Putin of Russia said on Russian television that Mr. Karlov had been “despicably killed” to sabotage ties with Turkey. Mr. Putin spoke with the Turkish president, Recep Tayyip Erdogan, by phone, and the two leaders agreed to cooperate in investigating the killing, and in combating terrorism broadly.