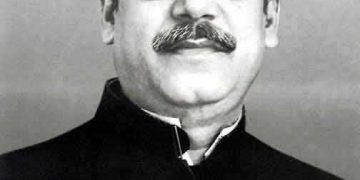 Dhaka, August 15 (NIA): Bangladesh was born in 1971 in violence. First, the Pakistani armed forces and its local allies had gone on a killing spree targeting East Bengali freedom fighters. The carnage they perpetrated provided a justification for a full-scale Indian invasion which forcibly dislodged the Pakistanis in a swift operation executed in collaboration with the local resistance group Mukti Bahini.

But the subsequent violent trend in Bangladeshi politics was set off not by the country’s violent birth, but by the assassination of Sheikh Mujibur Rahman, the founder of Bangladesh and its President  along with 15 members of his family in Dhaka in the early hours of August 15 ,1975.

Sheikh Mujib was hailed as the Bangabandhu   and recognized as the Father of the Nation, but his pro-India, pro-Soviet and pro-secular politics which he unraveled between 1972 and 1975, did not find favor with pro-Pakistani and pro-American elements in the country, including the armed forces. This, combined with a dictatorial tendency on his part, epitomized by the setting up of a one-party state, led to unrest spearheaded by the Jatiya Samajtantrik Dal and the Sorbohara Party. Mujib countered the challenge with repressive measures using the police and also his own outfit, the Rakkhi Bahini.

Mujib also alienated Khandaker Mushtaque Ahmed, once his Prime Minister-in-exile. Khandaker had been pro-US and pro-Pakistani even while being in Mujib’s cabinet in exile in Calcutta and was in secret touch with the US through the US Consulate in Calcutta.

Khandaker was not as committed to an independent Bangladesh as Mujib was. At any rate, he was not for a Bangladesh which is anti-Pakistan, anti-US, pro-Soviet and pro-India. Mujib removed him from the Foreign Ministry and made him Commerce Minister instead, which  Khandaker disliked. The disgruntled minister then became the political guide to a group of junior army officers who were plotting to kill Mujib. He is said to have been present in Mujib’s house in Dhanmondi when the leader and his family were mowed down.

The army officers involved in the plot had been working on the assassination plan for over a year. On May 15, 1974, one Major Faruk, on the directive of a senior army officer, had sought assistance from the US government through the embassy in Dhaka. The then US ambassador, Davis Eugene Boster, had forwarded the message to US State Department in a secret letter, according to Mujib Murder in US Documents written by Mizanur Rahman Khan.

Khandaker, even as Commerce Minister, was with the conspirators all along. Conspirator Maj. Rashid  assured Khandaker that top army officer Ziaur Rahman (who later came to power through a coup) would be on their side if they eliminated Mujib.  Khandaker was on board, and the conspiracy acquired a new momentum .The details of the plot were discussed in Khandaker’s house in Comilla and Dhaka.

The conspirators planned to strike when Mujib and his family were fast asleep.They gathered at the headquarters of the Lancers’ regiment in the Dhaka Cantonment. Major Syed Faruk Rahman and Maj.Abdur Rashid, the masterminds of the massacre to follow, had finalized their plans by 3.30 am. Major Faruk spoke to the soldiers tasked to assassinate Mujib. He told them that a new government would be formed under the leadership of Khandaker Mushtaque Ahmed which will be “Islamic”. To incite the soldiers he alleged that Mujib was planning to disband the regular army and use the ruling BAKSAL party’s armed wing Rakkhi Bahini instead.

On August 14, half an hour before mid night, the conspirators collected arms and ammunition from the armory of the 2nd Field Artillery. Accompanied by 10 to 12 soldiers of the artillery and the lancers, Major Abdur Rashid and Captain Jahangir went to the armory and ordered the guards to unlock it. The order was obeyed and the gang helped themselves to an assortment of  weapons.

The attackers opened indiscriminate fire on Mujib’s residence at Dhanmondi. Mujib’s son, Sheikh Kamal, rushed to the ground floor but Capt. Huda shot him. When Kamal revealed his identity, Huda shot him again killing him. Major Muhiuddin along with his force went to the first floor and kept firing. Captain Huda and Major Noor joined them soon.

Maj. Muhiuddin and his men led a shocked Mujib down the stairs. Mujib asked his captors what they wanted. They said he should go to the radio station and announce that he is resigning. But before he could reply, Majors Huda and Nur shot him with their sten guns. Profusely bleeding, the President collapsed on the stairs. After killing Mujib, the killers mercilessly killed all family members living in the house including women and children. They stormed the bathroom in which they were hiding.

The assassins promptly installed Khandaker Mushtaque Ahmed as President that very afternoon. Khandaker lost no time in declaring Martial Law and giving the killers indemnity. He also declared the killers as Sons of the Sun (Shoorjo Shontan). Predictably ,Pakistan was the first country to recognize the Khandaker government.

But Khandaker was overthrown in November that year. However, his  successors Ziaur Rahman and H.M.Ershad, who came to power through military coups, retained the 1975 Indemnity Ordinance issued to protect Mujib’s assassins. Ershad, who seized power in 1982, also continued to politically rehabilitate war criminals and kept ignoring the demand for trial of the killers of the Father of the Nation.

After Mujib’s assassination, a power struggle ensued in the army. There was a coup on November 3 and again another on November 7. On the night of November 3, four pro-Mujib former cabinet ministers, Syed Nazrul Islam, Tajuddin Ahmed, M Mansur Ali and Qamaruzzaman, were brutally murdered in prison. The November 7 counter coup led by the followers of Jatiya Samajtantrik Dal and Gen Zia, led to the killing of Gen Khaled Mosharraf, Colonel Najmul Huda and Lt Col ATM Haider.

In the meanwhile, an Islamization movement started by President Khandaker in his short tenure,   proceeded

without let or hindrance. Khandaker’s successors, Justice Sayem and Gen Ziaur Rahman, continued Islamization. The constitution was amended through Martial law proclamations to replace secularism with “absolute trust and faith in Almighty Allah”. The constitutional restriction on the use of religion in politics was withdrawn, allowing some anti-liberation Islamic political parties and organizations, including the Jamaat-e-Islami, to resume their activities.

Ziaur Rahman’s regime began a policy of rehabilitating of war criminals. Thus, Shah Aziz, who opposed Bangladesh’ birth,  was made Prime Minister. Anti-liberation activist Abdur Rahman Biswas was made President of Bangladesh in 1991. Two more war criminals Matiur Rahman Nizami and Ali Ahsan Mohammad Mojaheed, Chief and Secretary General of the Jamaat-e-Islami, were made Ministers by Zia’s widow, Khaleda Zia, in her 2001 government.

After Zia was assassinated in 1981, Bangladesh again came under Martial Law. In March 1982, Gen Ershad, the then army chief, grabbed state power overthrowing the then president Justice Abdus Sattar. Like his predecessor, Ershad used religion to consolidate his position. He made Islam the state religion in 1990.

Islamic political parties and organizations mushroomed since the constitutional ban was repealed in 1976, allowing the formation and functioning of organizations based on religion. According to the Daily Star , between 1964 and 1970, 11 Islamic parties involved in various activities. But after 1976, the number went up exponentially.

Thousands of Bangladeshi youths went off to fight in Palestine, Kashmir and Afghanistan in the 1980s and 1990s. A group of Bangladeshi Mujahideen returnees from Afghanistan declared on April 30, 1992, the establishment of Harkat-ul Jihad, Bangladesh or HUJI-B, a very active group now involved in killing liberals, liberal bloggers and foreigners. They attack Baisakh cultural celebrations, cinemas and entertainment programs for being un-Islamic. A local Islamic group, comprising youth from elite, English speaking families, gruesomely killed with machetes, twenty foreign and local diners at an up market  restaurant in Dhaka on July 1.