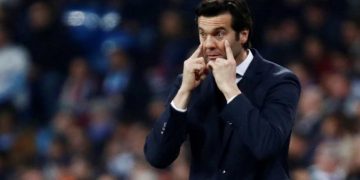 by Editor
in Around The World, Football, Sports
Reading Time: 1 min read
3 0 March 5 (Wionews) – Real Madrid coach Santiago Solari has reacted to the rumours of his exit from the club as there have been speculations that Jose Mourinho might return as a head coach.

Recently, Mourinho was a guest pundit on Qatar-based beIN Sport where he analysed Real’s latest loss to Barcelona. He said, “Return to a club that I have been before?”.

And the rumours started when he said, “If I think the right club, the right structure, the right ambitions, I will have no problem at all.”

“I think it’s really a reason of pride when a club where you worked before wants you back,” Mourinho added.

Mourinho managed Real for three stormy seasons from 2010 to 2013.

Solari responded with a joke about Roberts at his press conference on Monday. When asked whether the actress would prefer himself or Mourinho, the Argentine smiled.

Real Madrid “has always been more courted than Julia Roberts”, said coach Santiago Solari.
“Good question,” he said. “You should ask her.”

“It is true that we have had lots of chances in recent matches, except in the last one, and we have to take them,” said Solari.

“The dressing room is strong, these players have a lot of experience and a lot of character,” Solari said. “That does not mean we’re happy with what’s happening.”

“We want to win every game. When we do not win we are not happy, but tomorrow we have another game,” he added.