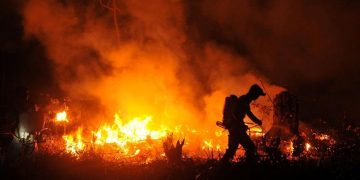 Indonesia is one of the leading producers of haze in the world.  Indonesian forest fires, which cause the haze, are increasing at an alarming rate affecting other countries in Southeast Asia. The phenomenon has been going on for decades. But neither   Indonesia nor the Association of South East Asian Nations (ASEAN), of which it is part, is trying to control it. The principle of non-interference, which is a core value of ASEAN, hinders the ability of the organization to prevent forest fires in Indonesia

The other area of concern is: While economic growth is important to developing countries, how much of their land are they willing to exchange for this?

Indonesian forest fires have been going on for decades. Forest and land fires seem to be an annual environmental crisis in that country. Back in 1997 and 1998, there was a huge haze crisis that was felt across neighboring countries.

Deforestation happens for many reasons, but it often occurs when the forested area is cut and cleared in order to make way for agriculture or grazing.  Deforestation is meant to improve the economic status of the country. Although this sounds beneficial, it has adverse repercussions.

According to the Scientific American Journal, tropical rainforest deforestation contributes more to atmospheric carbon dioxide than the sum of all cars and trucks on the world’s highways. Increased carbon dioxide emissions in the atmosphere contribute to the “greenhouse effect” on a worldly scale.

The “greenhouse effect” is the mechanism heating up the Earth’s surface. When the Sun’s energy enters the earth’s atmosphere, the remainder is absorbed and re-radiated by greenhouse gasses. This is termed “global warming”.

In 2015, Indonesia had created more air pollution in a few weeks than what Germany does in a year. It was considered as the greatest environmental disaster of recent years and the worst forest fires ever recorded.

Every year, Indonesia burns thousands of square kilometers of land as a cheap way to prepare the land for the next crop. Indonesia was blanketed in a toxic haze that affected millions of its people. The haze spread to neighboring countries, Singapore, Malaysia, Thailand, and even the Philippines. It had an effect on tourism, aviation, and ground transportation.

In 1999, Indonesia decentralized its administration. That created a problem. According to Nur Hidayati, the license to perform “slash-and-burn” practices could be secured from the local administrations. This was easy, and slash and burn cultivation continued apace.

In 2016, the “killer haze” may have caused over 100,000 premature deaths. In 2017, it was reported by Jakarta Post that forests and lands were burning in the Sumatra Islands. In 2019, the director of the Forestry and Environment Ministry  confirmed that a total of 2.12 million acres had been burnt by the end of September 2019, which was more than what was burnt in the previous year, 2018, (529,267 hectares).

These hazes of smoke were shown to have an immediate respiratory impact. Coughing, if left untreated, could escalate into a more dangerous situation, risking the respiratory health of several people across the region.

Chronic respiratory problems are just one of the health problems afflicting upto 70 million people in Indonesia’s neighborhood. It is also reported that many suffer from skin and eye ailments as a result of the haze.

The widespread destruction of trees and peatlands in Indonesia has made the country the third-largest emitter of carbon dioxide in the world.

The toxic haze has a severe impact on international relations as well. Tension is growing high between Borneo and Indonesia because of the dire situation. In June 2013, Singapore experienced a particularly dangerous haze with the Pollutant Standard Index reaching 371, This was officially considered “hazardous”.

In response, the government of Singapore urged its residents to stay indoors, possibly for weeks.. Many businesses, agencies, and infrastructures were forced to close due to this sudden noxious haze.

Flight controllers at Changi Airport were told to take precautions because of low visibility, while corporations like McDonald’s had ceased delivery of their services in an effort to preserve the wellbeing of their workers, and sports organizers had canceled many weekend competitions.

However, the emergency lasted only for three hours, when the reading went down to 253. That was still very unhealthy and could cause serious respiratory complications

A similar incident occurred again in 2015, forcing Singapore to close all schools for three full days just to avoid any health hazards.

Additionally, the Singapore National Environment Agency talked about the implementation of measures that sought to improve the air quality of the nation by 2020. Also of concern were local causes such as  the effects of transportation and industries.

Brunei sought to make a law on August 5, 2019, to address the rampant burning of forest within its borders. This law will impose fines on individuals found to be carrying out such acts. Martinah Hj Tamit, Acting Director of the Department of Environment, Parks, and Recreation, stated that open burning of green waste in is still a major concern in Brunei.

On July 31, 2019, Indonesian President Joko Widodo ordered  various governmental agencies to quickly extinguish forest fires occurring within their jurisdictions. Both military and civilian personnel were deployed in various provinces. In the province of Riau, 27,683,47 hectares had been burnt. 27,273,97 hectares were burnt in West Kalimantán; 236,49 hectares in South Sumatra; 52,53 hectares in South Kalimantan; and 27,618 hectares of Central Kalimantan and 4,18 hectares of Jambi.

Malaysia expressed its willingness to provide assistance to Indonesia with its cloud-seeding initiative. It has also said that it will support Indonesia’s actions against Malaysian companies proved to have been involved in slash-and-burn practices.

On August 16, 2019, the Malaysian Maritime Enforcement Agency dispatched two Bombardier CL415 amphibious aircraft, specifically designed for fire-fighting, with 198,000 liters of water in order to extinguish the forest fire in Miri. And on September 10, 2019, the National Disaster Management Agency dispatched to Sarawak 500,000 facemasks in response to the escalating trans-boundary haze.

The ASEAN Agreement on Trans-boundary Haze Pollution was signed way back in 2002. The agreement states that ASEAN members would do their part in reducing the haze pollution occurring in Southeast Asia. The Agreement acknowledges that trans-boundary haze pollution is caused by land and/or forest fires and called for national endeavors and international collaboration to end such atmospheric pollution .

The agreement was ratified by Indonesia. In addition, there are national laws such as the Planting Law of 2014 and the Environmental Protection & Management Law of 2009 which accord with ASEAN’s zero-burning strategy. However, none of them make any particular reference to the pollution caused by haze resulting from traditional slash-and-burn activities.

Equally important to note is that Indonesia does not consider haze as a disaster because it is man-made. Therefore, what Indonesia currently has is an emergency response team that can only be used when the haze is already at the status of “emergency standby”.

ASEAN’s “no interference rule” stands in the way of the organization’s ability to put pressure on Indonesia to control slash and burn cultivation and thereby prevent forest fires and atmospheric pollution.

Where there is a national problem within a country, even where it harms and affects circumstances in another country or region, other States shall not interfere with or interfere with that country, ASEAN believes. ASEAN countries help control fires but do not address the causes of the firer – the roots of the problem.

Singapore was ready to provide assistance and immediate action to the fires blazing from Indonesia. They have contributed about S$5 million to the ASEAN Specialized Meteorological Centre for a regional capacity building program in order to monitor haze activities and hotspots in Indonesia. Even Malaysia was willing to provide immediate help to contain the haze crisis. But none of these ASEAN countries can take action against Indonesia for polluting the atmosphere thanks to the charter.

On the contrary in North America, the US had taken legal action against Canada in 1941. In the Trail Smelter case, the United States of America sued Canada due to the effect of sulfur dioxide emanating from Trail Smelter that caused damage to the state of Washington.

It is the State’s responsibility to safeguard other States from detrimental incidents or acts by individuals or corporations within its jurisdiction at all times. There are many cases in regard to environmental and trans-boundary damage and many decisions have been given in arbitral trial courts.

(Kazzandra Alyzza Galleta is a research scholar at Far Eastern University, The Philippines)