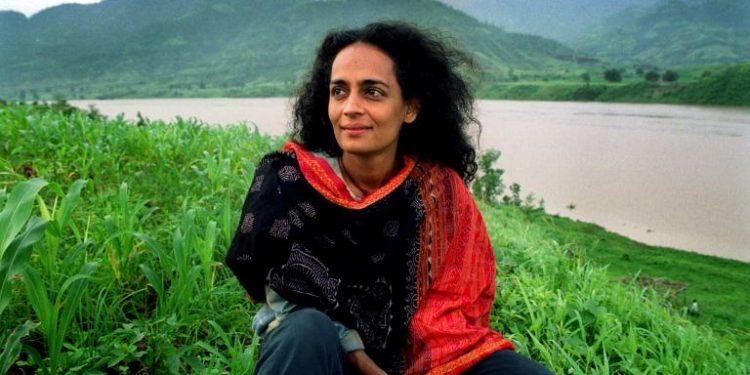 With its gold-striped spine, crimson endpapers and silky leaves, My Seditious Heart is a handsome edition of previously published essays by Booker-winning writer rundhati Roy. Despite the stately presentation and the fact that some of the essays first appeared 20 years ago, these studies are trenchant, still relevant and frequently alarming. Roy reveals some hard truths about modern India and makes powerful analytical forays into American and British foreign policy, aid, imperialism and attitudes.

Roy’s India is one of extreme wealth and extreme poverty; opportunity and exploitation; cynicism and hypocrisy; ambition and greed; dynamism and thuggery. “India lives in several centuries at the same time. Somehow we manage to progress and regress simultaneously.” She describes emaciated workers toiling by candlelight through the night to lay broadband cable to accelerate the country’s digital revolution. The Greater Common Good looks at (futile) resistance to the Sardar Sarovar Dam in the Narmada valley, the forced displacement of local people and the slandering of activists as troublemakers. Another essay looks at uranium mining in Jadugoda, while in another piece Roy accompanies tribal anti-government fighters in the forests of Dantewada in Chhattisgarh.

Certain areas of interest emerge clearly. Roy covers the aggressive appropriation of tribal rural lands for mining and water projects, the expansion of nuclear weapons programmes, the privatisation and commercialisation of Indian services, the legacies and continuation of colonisation and imperialism in various forms, government corruption, American warmongering and national hypocrisy. The essays are also prescient in their early sensitivity to environmental damage and to indigenous rights.

Roy is of course a consummate storyteller, her novels The God of Small Things and The Ministry of Utmost Happiness having been translated into 40 languages. These essays are much denser than her prose fiction, although not rebarbatively so. Rather, they are thick with intelligence and firmly bolstered with fact. To Roy’s exacting eye, everything in the world is complicated, contradictory, contingent – even resistance and freedom-fighting. She gives a droll commentary on the glib language of human rights in the essay Power Politics, reflecting on a do-gooders’ conference at the Hague and the way “the whole purpose of language is to mask intent” in such environments, resulting in “consummately written, politically exemplary, socially just policy documents that are impossible to implement and designed to remain forever on paper”.

If there is one theme that unites all the essays in this collection, it’s that of exploitation: corporate greed, the abuse of natural resources, forceful expansion, political advantage-taking, shameless hypocrisy and expediency. In the real world, the powerful win against the good, the best liars get away with it, force trumps virtue, theft and violation go unpunished, hubris and karma lie thin on the ground. No authority figure or moral pronouncement is exempt from critical engagement. Roy’s done the research, and she has all the receipts.

Some of the essays provoke intense sadness, such as her commentary on the early days of the invasion of Iraq and Afghanistan. In The Algebra of Infinite Justice, published in September 2001, she writes: “A coalition of the world’s superpowers is closing in on Afghanistan, one of the poorest, most ravaged, war-torn countries in the world… As supplies run out – food and aid agencies have been evacuated – the BBC reports that one of the worst humanitarian disasters of recent times has begun to unfold.” War Is Peace, Roy’s excoriation of US military policies – including bombing 20 different countries since the second world war at the time she was writing – is a highlight of the book. In An Ordinary Person’s Guide to Empire, she also looks at British and US support for Saddam Hussein and his eight-year war against Iran. It is hard to read these studies in 2019, with the whole region destabilised, Syria in ruins, the racist culture wars raging globally, a proliferation of nihilistic terrorism and a millions-strong refugee emergency.

In keeping with the current #MeToo movement, the last two essays concern Elizabeth director Shekhar Kapur’s notorious film Bandit Queen, about Phoolan Devi, the low-caste woman who became a rebellious champion of India’s underdogs despite repeated rapes, abuse and human rights violations. Kapur “openly admitted that he didn’t feel that he needed to meet Phoolan”, while his male producer said she was “too much trouble” to consult, and so they used “the identity of a living woman, recreating her degradation and humiliation for public consumption… doing it without her consent”. Screening the film “to jeering male audiences made her feel she had been raped all over again”. Kapur still has a reputation as a great auteur; Devi was pursued through the courts and assassinated in 2001.

Roy writes in her foreword that “Not one iota of my anger has diminished” since the time of writing these essays. Yet they do not come across as angry. Instead, their impact comes from their precision, research and damningly clear reportage.