by Editor
in Around The World, United States, World
Reading Time: 2 mins read
5 0 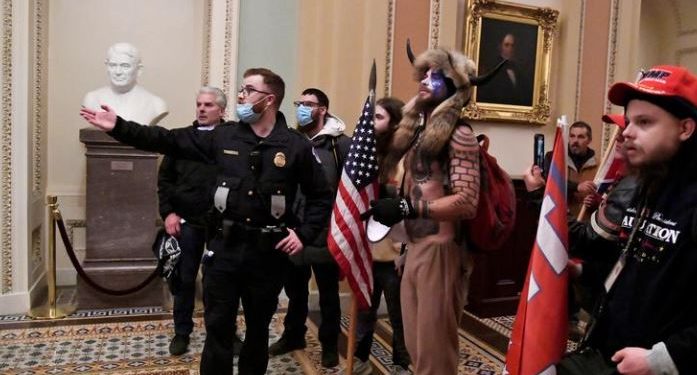 FILE PHOTO: Police speak to supporters of U.S. President Donald Trump, including Jake Angeli in the horn and fur costume, as they demonstrate on the second floor of the U.S. Capitol near the entrance to the Senate after breaching security defenses, in Washington, U.S., January 6, 2021. REUTERS/Mike Theiler/File Photo

Washington, January 15 (Reuters) – United by political grievances, they came in costumes, snapping selfies, calling themselves patriots. Some came armed for battle and planning for “war.”

As authorities begin to charge the rioters in the Jan. 6 siege of the U.S. Capitol, court documents paint a picture of a diverse mob that included both citizens with mainstream careers – police officers, a flower shop owner, a state lawmaker, military veterans, even an Olympic medalist – as well as Americans on the fringe. One was a member of the Proud Boys, a far-right extremist group. Another had a caveman costume beneath a police bulletproof vest. One served time in prison for attempted murder.

They traveled from as far as Hawaii to join the protest of Congress certifying Democrat Joe Biden’s election win, which Republican President Donald Trump has falsely claimed resulted from widespread election fraud. Some brought all manner of weapons or explosives, underscoring the grave threat from an insurrection that resulted in five deaths, including a police officer, and dozens of injuries.

Federal prosecutors have said they expect to bring charges against hundreds of people involving the riot and related threats and violence. They had charged about 80 as of Thursday, a Justice Department spokeswoman said. Their task was made much harder by that fact that overwhelmed police initially made few arrests of the hundreds of people who stormed the building – just 14 were detained that day by the U.S. Capitol Police, which guards the building. And yet many suspects made investigators’ and prosecutors’ jobs easy by mugging for news cameras and posting what authorities described as real-time confessions – including videos of themselves – in postings on social media as they pushed their way inside the Capitol, home to the U.S. Congress, according to a Reuters review of court records.

David Blair – a Trump supporter who lives in Washington’s suburbs and was charged with attacking a police officer with a stick – came to the Capitol after seeing that it had been overrun by a mob supporting the president because he wanted “to witness history,” he told Reuters in a text message. “I ended up still finding a way to get in trouble because I had so much pent-up emotion,” he wrote.

The initial round of charges do not reflect the full gravity of the siege that paralyzed Congress as members fled for their lives and hid from the mob. Authorities expect more serious charges to follow after more intensive investigations. Washington’s acting U.S. attorney, Michael Sherwin, said Tuesday that he had assembled a team to focus on building sedition and conspiracy cases related to the most “heinous” actions during the siege. Investigators are reviewing communications, along with travel and financial records, to track any coordination or organization among the rioters.

“People are going to be shocked with some of the egregious conduct that happened in the Capitol,” Sherwin said.