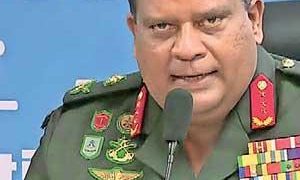 Colombo, May 4 (Daily Mirror) – Army Commander and Head of the National Operations Center for Prevention of COVID-19, General Shavendra Silva yesterday denied claims that his niece’s wedding had been held on Monday at a leading luxury hotel in Colombo amidst the pandemic, stating this was part of a campaign to sling mud at him.

Social media was rife yesterday with the pictures of a bride and groom being shared and another picture showing Silva hugging another military officer allegedly at the wedding, on several platforms claiming it was Silva’s niece’s wedding.

The pictures went with a caption stating that the authorities had decided to ban all weddings for two weeks from Monday midnight to allow this wedding to take place during the day yesterday. However Silva said these were all false claims stating his two nieces were aged 16 and 19 and they still had several years more to tie the knot.

“My sister’s daughters are still students so this claim is absurd. I wish to reiterate that no one in my family or even in my distant family is planning on getting married for the coming two years atleast. The picture of me in uniform is from the day I was sworn in as the Army Commander,” Silva said.

He further urged people to stop wasting time slinging mud at him and encouraged people to follow all health protocols to prevent the further spread of COVID-19. Meanwhile, Army Headquarters in a statement said that a person, believed to have placed this false social media blog was found later on correcting his wrong report. (Jamila Husain)