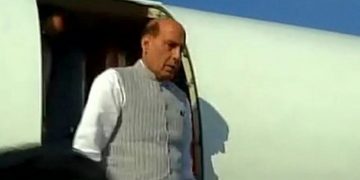 Are India and Pakistan reaching out to each other on Kashmir?

Are India and Pakistan reaching out to each other on Kashmir? Srinagar, August 4 (NIA): Even as unrest continued in Kashmir for the 26 th day  on Wednesday, with the local police filing a murder case against the Indian Security Forces for killing a youth with pellet guns being a new development, there are indications that India and Pakistan are reaching out to each other to defuse the crisis which has already led to the loss of 53 lives.

Commenting on the emerging situation, the Srinagar-based newspaper Greater Kashmir says that amid calls for substantive political measures to cool tempers in Kashmir, Union Home Minister Rajnath Singh’s visit to Pakistan is largely seen as New Delhi’s softening toward the estranged neighbor. Pakistan too lost no time in reciprocating the ‘olive branch’ by blocking a Srinagar-bound relief convoy, which was seen off by Hafiz Saeed on Tuesday near Chakoti in Pakistan-administered Kashmir.

But on both sides, hawks have slammed their respective governments for hurting the public sentiment. This makes the Rajnath Singh visit to Islamabad to attend a SAARC meeting of Home Ministers even more significant, raising hopes of an unwritten policy of engagement, Greater Kashmir observes.

Many in India and Pakistan believe that Hafiz Saeed’s intervention in Pakistan’s foreign policy vis-a-vis Kashmir  had mounted pressure on New Delhi to tone down its belligerence.

While in Kashmir itself, the concept of a dialogue or political engagement has received a beating ever since BJP assumed power in New Delhi, keen observers view the Indian Home Minister’s visit to Pakistan at the peak of Kashmir’s anti-India stir, as being an opportunity as well as a challenge.

“It’s clear that Rajnath was not supposed to have a bilateral meeting with his Pakistani counterpart. But many things happen during such international meetings.  If Pakistan succeeds in convincing Rajnath of a détente on Kashmir, Delhi will send out positive signals on his return. But if both sides end up exchanging accusations, New Delhi will resort to harsh measures to deal with the situation in Kashmir,” Greater Kashmir said quoting an un named analyst.

Rajnath’s visit to Pakistan has assumed further significance in the backdrop of Bangladesh’s posturing, the paper observes. Dhaka has protested against Pakistan’s alleged role in exporting terror to the neighborhood. Bangladesh sent a Home Ministry official instead of its Home Minister.

In comparison, India has been more accommodative. Earlier, India would off called off talks with Pakistan even if the latter talks to the  Hurriyat (Kashmiri resistance) leaders over tea in the Pakistani High Commissioner’ s residence in New Delhi.

Kashmir watchers say that the significance of the epic protest movement in Kashmir has not been lost on Delhi’s policy makers. “But they want to come via Islamabad. That would make things easier for Delhi and we might here right noises in the near future,” Greater Kashmir opines.

India’s engagement with Pakistan has often initiated Delhi’s political engagement with Srinagar. The only worry within Kashmir’s resistance circles is the ever elusive consensus regarding a two-way engagement.

Indian Kashmir’s resistance leaders Syed Ali Geelani and Asiya Andrabi and the militant leadership based at Muzaffarabad, have long been skeptical about any such engagement.

As a top leader of the Hurriyat (resistance) movement said: “We have already forwarded a proposal to the international community. The  Government of India needs to recognize Kashmir as a disputed territory and acknowledge the right of self-determination of the people living here. Other things will follow. Military laws have to go, prisoners have to be released, and the police chase has to stop. Hurriyat leaders should be given political space. That would set a condusive atmosphere for talks.”

Chief Minister Mehbooba Mufti recently remarked that the “thing in the people’s mind has to be addressed.” The fresh phase of uprising has already defined the “thing in mind”. Even if Pakistan and India agree upon a sketch of talks, peace in Kashmir will largely depend on whether or not the “thing in peoples’ mind” in Kashmir forms the core of the talks.