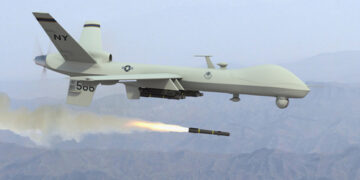 Colombo, August 28 (newsin.asia): As expected, the US military has carried out a reprisal strike in Afghanistan after the ISIS-Khorasan Province (ISIS-KP) attacked Kabul airport on Thursday killing 13 US servicemen and 170 Afghan civilians. On top of the atrocity, the Taliban regime in Kabul did not take any punitive action against the perpetrators.

New York Times reported on Saturday that the US military forces conducted an “over-the-horizon counterterrorism operation on Friday against an ISIS-K planner.” The paper quoted Capt. Bill Urban, spokesman for the US Central Command, as saying in a statement, that “the unmanned airstrike occurred in the Nangahar province of Afghanistan.” Captain Urban further said that “initial indications are that we killed the target. We know of no civilian casualties.”

The attack at the airport on Thursday was one of the deadliest in the nearly two decades since the 2001 US-led invasion of Afghanistan.  American officials believe “another terror attack in Kabul is likely,” the White House press secretary, Jen Psaki, said on Friday. “The threat is ongoing and it is active. Our troops are still in danger.”

President Joe Biden had earlier vowed to retaliate after the deadly Kabul blasts saying: “To those who carried out this attack, as well as anyone who wishes America harm, know this: We will not forgive; we will not forget. We will hunt you down and make you pay. I will defend our interests in our people with every measure at my command.”

The powers-that-be in Kabul now had indicated that no action would be taken but this was not noticed. Khalilur Rahman, leader of the Haqqani Network, which is now a key component of the Taliban-led alliance, told the Pakistan Geo TV journalist Ayaz Syed on August 24, that the Taliban did not believe in attacking or eliminating opposition militant groups. Instead, it wanted them to negotiate an understanding for peaceful coexistence. This was an advance warning that the Taliban regime would not go against any group, including ISIS-KP, however much the US might want action against it.

Khalilur Rahman, who has a US$ 5 million US bounty on his head, said that the new dispensation has no animosity against anyone, including Ashraf Ghani, Amrullah Saleh and Hamdullah Mohib. “Whenever they want to come, they can come; they all are our brothers now.”

When Ayaz Syed asked him about the concerns of US, China, Pakistan and Uzbekistan regarding local and international militant organizations, like al-Qaeda, East Turkestan Islamic Movement (ETIM), Tehreek-e-Taliban Pakistan (TTP), Khalilur Rahman said: “ We want peace among all the Muslim countries, my advice is peace. For the entire world and Muslims, my message is that all countries give rights to all the people following different religions; have peace with them and should not indulge in oppression.”

In other words, he was asking China to stop oppressing the Uighurs in Xinkiang and negotiate with the East Turkistan Movement and Pakistan to settle issues raised by the Pakistani Taliban through talks.

Stressing the value of national unity, he said that the US got defeated in Afghanistan despite the fact that NATO countries were with it, only because the Afghans stood together.

Khalilur Rahman is meeting key opponents to convince them to either join the Taliban or accept them as partners. The first big success he got was when Hashmat Ghani, the brother of self-exiled Afghan President Ashraf Ghani, announced his support for the Taliban. Khalil went to see him at his place in the outskirts of Kabul.

Asked about the fear psychosis in Kabul, Haqqqani said: “Islam is a religion of peace. The Emirate-e-Islami would not take revenge against anyone.. The fear is spread by the enemy. The reason for our animosity was the system we wanted changed. Now the system has been changed. People should not leave this country. Everyone should live here and contribute to the people of this country. Tajik, Baloch, Hazara, Pashtun, all of us are brothers.”

This was a clear indication that the Taliban or the Haqqani Network would not go against the ISIS-KP despite the airport blasts and the killing of US troops. His statement was also a clear indication that he would expect China, Pakistan and the US to settle their differences with the al-Qaeda, East Turkestan Islamic Movement (ETIM), Tehreek-e-Taliban Pakistan (TTP) through discussions and accommodation and  not expect the Taliban to tame or eliminate them.

The Haqqani Network, which Khalilur Rahman heads, is in charge of security in Kabul, and is technically answerable to the world for the atrocity at the Kabul airport.

Indications are that the Taliban would allow the US to evacuate American nationals by August 31 but would not extend the deadline. Secondly, the Taliban would not allow any more Afghans to escape. The  blasts were specifically meant to tell Afghans that they had better not leave Afghanistan and embarrass it abroad at the instance of the Western powers.