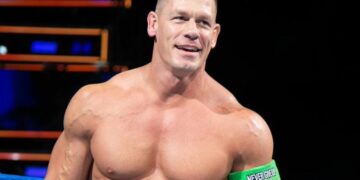 Actor John Cena apologises for describing Taiwan as a country

Actor John Cena apologises for describing Taiwan as a country

by Editor
in Around The World, Football, Sports, World
Reading Time: 3 mins read
7 1 May 26 (Bloomberg) – U.S. actor and former World Wrestling Entertainment Inc. champion John Cena apologized for describing Taiwan as a country in a promotional video for his latest movie, saying sorry in Mandarin after the comments triggered a backlash in China.

Cena made the apology in a clip posted Tuesday on his official Weibo account, a Chinese social media platform like Twitter. He had earlier this month indicated that Taiwan was a country in a video promoting his film “Fast & Furious 9,” according to China’s state-run Global Times newspaper.

“I made a mistake. I must say now that, very very very importantly, I love and respect China and Chinese people,” Cena said in Chinese in the video, without elaborating further.

The apology video triggered further anger on Chinese social media, where users denounced Cena for not stating that Taiwan was part of China. Beijing argues that democratically run Taiwan is part of its territory, and has in recent years increased diplomatic pressure on the Taipei government and other nations that recognize its legitimacy.

The apology also drew flak in the U.S., where critics — including Republicans and conservative media – slammed the star for bowing to China. Tom Cotton, a Republican senator from Arkansas, described the move as “pathetic.”

Cena is the latest high-profile westerner to come under fire for publicly crossing China’s political lines, amid a boycott of some U.S. and Europe-based brands that had taken a stand against the treatment of Muslim Uyghurs in China’s far west Xinjiang region.

Hennes & Mauritz AB faced ire in recent months after a statement it made expressing concern over reports of forced labor in Xinjiang resurfaced. Its Chinese outlets disappeared from Apple and Baidu Maps searches, and some stores in smaller cities were closed by landlords.

The company’s name and products can no longer be found on major Chinese e-commerce platforms including Alibaba Group Holding Ltd.’s Taobao and Tmall. Online sales of Adidas AG and Nike Inc. also plunged in the country in April after their comments on the Xinjiang issue drew them into the boycott.