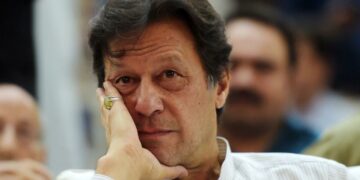 Pakistan, August 2 (Al Jazeera) – Pakistani Prime Minister Imran Khan has denied a report that Pakistani fighters have crossed the border into Afghanistan to aid the Taliban in its fight against the Afghan government.

“This is absolute nonsense”, Khan said in an interview with PBS NewsHour anchor Judy Woodruff.

Prime Minister Khan also said that Pakistan has suffered tremendously during the long US war in Afghanistan.

He said his government would not allow the United States to set up any bases inside Pakistan to do intelligence work or carry out counterinsurgency operations.

“We do not have the capacity to have any more fighting within our borders, any terrorism within our country,” Khan said.

“When we were in the height of that war on terror, which Pakistan joined, there were suicide bombs taking place all over the country. The businesses collapsed, tourism collapsed. So what we do not want to be as part of any conflict,” he said.

Khan said Pakistan pushed the Taliban to negotiate with the US over ending the conflict in Afghanistan and added the best political outcome in Afghanistan is an “inclusive government”.

“This is the best outcome. There is no other outcome because the military solution has failed”, he said.