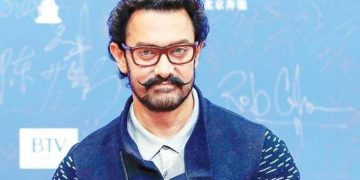 Aamir Khan as Krishna in the seven-part web series “Mahabharata”

Aamir Khan as Krishna in the seven-part web series “Mahabharata” Mumbai, December 23 (The Hindustan Times): Bollywood actor Aamir Khan experienced disappointment this Diwali with the release of his film Thugs of Hindostan, which failed to perform well at the box office. However, it seems there is no looking back for the actor as he is working on his next, bigger project Mahabharata.

The idea has been in the pipeline since long but his friend and actor Shah Rukh Khan has now confirmed that Aamir is indeed making efforts to revive it. On being asked about what kind of role he would like to play during a chat with DNA, Shah Rukh replied ‘Krishna from Mahabharata’ but went on to add “Krishna from Mahabharata has already been taken by Aamir so I will not be able to do that.”

Media reports suggest that Mahabharata was to be made on a budget of around Rs 1000 crore but will now be made as a seven-part web series. Earlier, Aamir was to star in astronaut Rakesh Sharma’s biopic but forwarded the offer to Shah Rukh in order to work on his dream project.

Writer Anjum Rajabali had also confirmed the same and said, “Frankly, I was very keen that Aamir should do the film. He liked the script, we discussed it a lot and we had a lot of hopes about it. Unfortunately, Aamir is consumed with a larger sort of project called Mahabharat.”