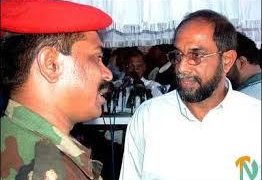 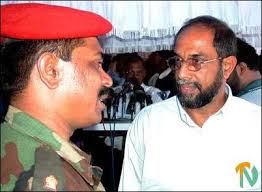 ‘Missing in action is the worst state to which we can lose a human being,’ avers Commodore (Ret.) Ajith Boyagoda — and he should know. A not especially academic young chap from the hill country, Boyagoda joined the then Ceylonese navy for the glamour of it; progressed fair-to-middlingly; saw Southampton, Suez and South India; and, in September 1994, on his final voyage, found himself in command of the Sagarawardene, Sri Lanka’s biggest warship, on the night that it was sunk by the Liberation Tigers of Tamil Eelam.

Hauled out of the sea by his assailants, he became a ‘show-prisoner’ — the LTTE’s highest-ranking military captive — and, abandoned by the nation on whose behalf he had been fighting, he and a dozen or so compatriots were left to rot in the malarial jungle of the Tigers’ northern sub-state.

For eight years they measured time in Red Cross visits, artillery attacks and (of course) the occasional cricket tournament. It was only when they eventually committed to a hunger strike — to attract the government’s attention — that discussions began in earnest about how to get them home. Boyagoda, in the interim, had been tried and acquitted of ‘war crimes’ by the LTTE — and found guilty, in absentia, of negligence by his own navy’s board of enquiry. He returned to Colombo to find himself ‘additional to Headquarters’ and struggling for basic interaction with his children.

The only prisoner memoir to have emerged thus far from Sri Lanka’s ill-prosecuted quarter-century-long domestic conflict, A Long Watchis an informative and important contribution to an underwritten subject, most particularly because Boyagoda unashamedly rejects the ‘ruthless terrorist’ narrative his countrymen might well have expected him to uphold.

Doggedly humane and good-humoured, he is punctilious about the fact that he was reasonably treated, candid concerning the grievances of Sri Lanka’s Tamil population in general, and sympathetic even towards his jailers — many of whom, he notes, were basically conscripted in ways that no one from the Sinhala Buddhist majority had ever been. He declares, with nigh-on saintly equanimity, he felt no animosity at all towards his captors.

The authors make no bones that this is just one person’s story (in truthA Long Watch is a little too first-personal to be much use to the average disinterested reader) — but many who lived through the bulk of the conflict, and especially former military colleagues, might be inclined to view things more stringently.he loss of the Sagarawardene (from the horse’s mouth, nb) comes across as a fiasco, and its commander’s behaviour in the aftermath less than heroic. And — though one ought not to judge a man too harshly for doing what he must — there’s little doubt he was over-collegial when it came to his handlers. In the years of his captivity he ‘avoided’ discussions of politics with his countrymen and co-prisoners, but he did not baulk at translating an English seamanship manual on behalf of the enemy. He ‘never contemplated an escape’, even when they were charged with locking themselves in at night; but when a captured army deserter blew himself up with a grenade, injuring several Tiger cadres, Boyagoda’s response was: ‘He was of troubled mind, I think.’ He subsequently refers to the jailers as his ‘family’.

His fundamental sincerity, though, cannot be faulted. Released from the navy (to mutual relief, one imagines), Boyagoda went to work for a micro-loans organisation, delivering, among other projects, tsunami-relief supplies to the LTTE heartlands. He now breeds tropical fish for export; but his personal emotional recovery still continues, and so, he feels, does that of his country. Seven years on from the state’s uncompromising military resolution, he writes: “We have to start sometime to turn the end of war into peace.”