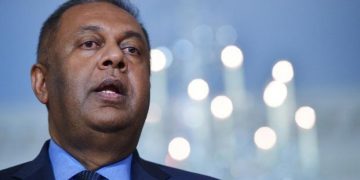 Colombo, July 26 (newsin.asia): The Sri Lankan Minister of Finance, Mangala Samaraweera, has said that every top political leader of the country, both past and present, has been in favour of ethnic harmony, power-sharing with the minorities, and devolution of power to the provinces. And yet, every one of them has backed out because of the opposition of a few vocal reactionaries.

Speaking in parliament on an adjournment debate on Thursday, Samaraweera began by stressing the centrality of the ethnic question in the post-independence political history of Sri Lanka.

“S.W.R.D. Bandaranaike (Prime Minister) was assassinated because of his attempts at conciliation with the minorities. The 1962 coup was significantly induced by fear of discrimination against Christians. The war, as our academics and intelligence men have observed, was the direct result of treating minorities as second-class citizens. “

“We all know that if there was any one cause for a rag-tag insurgency becoming a full-blown civil war, it was Black July. Similarly, it cannot be a coincidence that the Easter Sunday bombings took place following the Aluthgama and Digana riots. Although investigations are still underway, there is no reason to think that these riots played a role in radicalizing a few Muslim youth.”

But he points out that despite new constitutions, countless committees and endless debates the country still has majoritarianism entrenched in politics and law.

“It is our inability to resolve the national question that is at the very centre of our failure to make Sri Lanka peaceful and prosperous. Sri Lanka has been in crisis, remains in crisis and will continue to be in crisis until we can create a just and equal Sri Lanka for all Sri Lankans.”

“But the House “as cowered before a small but vocal minority of reactionary forces. And I am sad to say that a truly united Sri Lanka – a Sri Lanka where Muslims don’t fear Buddhists, where Sinhalese don’t fear Tamils, and where Christians can worship in peace – is a cause of mortal danger for certain members of this House.

“That Sri Lanka’s future as a prosperous, united and undivided country depends on establishing a constitution that would embrace and celebrate Sri Lanka’s multi-cultural, multi-ethnic and multi-linguistic identity based on the principles of equal citizenship, justice and the devolution of power,” Samaraweera said.

The first Prime Minister of Sri Lanka, who was also the founder of the United National Party,  D.S. Senanayake, strongly believed in ‘unity in diversity’. He emphatically remarked after the unfurling of the National Flag in February 1948,

Senanayake said: “Our nation comprises many races, each with a culture and a history of its own. It is for us to blend all that is best in us…There is no greater ambition in my life than to get all these communities together. For centuries the Sinhalese and Tamils have lived together in peace and amity. We have been governed by their Kings and they by ours.”

President Ranasinghe Premadasa said: “Multi-ethnic democracy has always been my vision for Sri Lanka. There is no other way. It has been my vision from the time I entered politics. My electorate in Colombo was multi-ethnic. I could not have represented my electorate for so many years had I not practiced multi-ethnic politics. Furthermore, now as President, my electorate is the whole country. I am the President for all groups and communities who comprise Sri Lanka.”

On March 2, 1990, Premadasa said: “Whatever the race, the religion or the caste that any individual belongs to, we must realize that he or she has a birthright to share of this country. It is only if that right is denied to persons on grounds of differences of race, religion, caste or other such considerations, that a threat of division of this country will arise, that a threat to the sovereignty of this country will arise and foreign powers will have an opportunity to interfere in our affairs.”

In its report, the Parliamentary Select Committee headed by Mangala Moonesinghe said: “ It is important to note that the Committee’s report recommended a scheme of devolution on lines similar to the Indian Constitution – in other words federalism.”

Prime Minister Ranil Wickremesinghe too has been a worthy custodian of this UNP legacy and has always stood for a political solution to the national question, Samaraweera said.

Similarly, leaders of the other main political party, the Sri Lanka Freedom Party, too shared this view.

Prime Minister SWRD Bandaranaike, who was the Sri Lanka Freedom Party (SLFP) founder leader said in Parliament on August 5 1958” “ I am satisfied that extremism in this country consists of the activities of a small minority, whether they are Sinhalese or Tamil, but that the vast majority of the people are reasonable and moderate and only wish to live together with mutual respect as well as self-respect, so that we could march forward together and achieve that progress and that position for us all which have been hoping to obtain under this freedom we have, freedom for the Sinhalese – yes, remember too – that it is the freedom for the Tamils, for the Muslims, for the Malays, for the Burghers, who are all fellow citizens, yes, if it is not freedom in that way for all, I too repeat the words of another leader…Shri Jawaharlal Nehru who stated that if freedom meant internal communal strife or injustice or suppression of minorities to hell with Swaraj.”

Bandaranaike believed that that centralized government was imposed on Sri Lanka by the British colonizer. Speaking in Jaffna on the 17th of July 1926, in a  titled: “Federation as the Only Solution to our Political Problems” Bandaranaike described Sri Lanka’s pre-colonial system of government as decentralized and similar to a loose federation. He stated that the British introduced a centralized form of government and argued was unsuitable for a country like Ceylon. He is also reported to have said: “In Ceylon, each Province should have complete autonomy”. Earlier that year, in May and June, he wrote six articles in the Ceylon Morning Leader making the case for federalism.

“There would be trouble if a centralized form of government was introduced into countries with large communal differences,” Bandaranaike said

“President Chandrika Kumaratunga was brave enough to stand on election platforms and speak truth to power. In fact, I remember Chandrika Bandaranaike Kumaratunga coming to Akurassa in 1993 as the Chief Minister of the Western Province and in the deep south where 90% were Sinhala Buddhist, she said that Sri Lanka needs a Federal System and at the elections, we had a resounding landslide victory even after that statement.”

“She had the courage to boldly state in public what the political class said in private: the solution to the national question was federalism,” Samaraweera said.

Samaraweera went on to state that the Leader of the Opposition Mahinda Rajapaksa supported the 1995 Union of Regions proposals.

At the inaugural session of the All Party Representatives Committee on July 11,  2006, Rajapaksa said: “People in their own localities must take charge of their destiny and issues relating to identity as well as security and socio-economic advancement, without over-reliance on the center.   Central decision making that allocates disproportionate resources has been an issue for a considerable time. In sum, any solution needs to allow people to take charge of their own destiny. This has been tried out successfully in many parts of the world. Any solution must be seen as one that stretches to the maximum possible devolution”.

On January 9,  2016, the next leader of the SLFP, President Sirisena told parliament: “Regardless of what people say, I am of the belief that if the Bandaranaike-Chelvanayakam Pact had become a reality, we would not have witnessed the creation of terrorism.”

“The founder leader of the Janatha Vimukthi Peramuna (JVP), Rohana Wijeweera, supported these views and went further than the others in the Left. In a speech that can be watched on YouTube, he argued in Jaffna in 1982 that the solution to the ethnic conflict was acknowledging and respecting the right of minorities to self-determination.

“We propose to create areas of self-rule where minority communities have large concentrations. We state that any ethnic community or any minority group has the right to self-determination,” Wijeweera had said.

Samaraweera said that Sri Lankan are at a rare moment in history, where the Tamil political leadership is united and represented by a statesman of the R. Sampanthan’s stature, wisdom and temperament.

“This is not only a bonus for the Tamil Community but for the entire country. This may not be the case in the future. We must not let this opportunity go.”

Sampanthan had said: “I want to work with fellow Sri Lankans to resolve this conflict within the frame work of a united, undivided, indivisible Sri Lanka .That would be the best thing for Sri Lanka.”