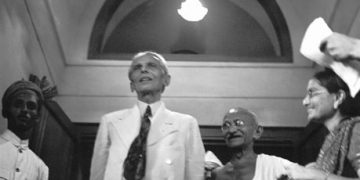 A bridge too far?

A bridge too far? An Indian-journalist-turned-politician recently wrote on a subject which continues to flow, in public discourse and disputation, and its transmutation to the present. (Reference: M. J. Akbar, “Hinduism—the struggle against Jinnah’s Islam”, Bloomsbury). The partitioning of the subcontinent in 1947 into two sovereign states on the basis of religion led to a further separation when the eastern wing of Pakistan assumed independence in 1971, on linguistic exceptionalism.

The transfer of power drama had left many questions unanswered. The principal one was whether partition, and because of it, conflicts over 70 years could have been averted. One version of the story is that the British were alerted to the possibilities of a revolt by the army, and a Cabinet Mission arrived in India to discuss the modalities of handing over power, to be presided over by a man in a great hurry, the Governor-General, Lord Louis Mountbatten.

The Cabinet Mission Plan revolved around the possibility of a country with strong State or Provincial units under the nominal head of a Centre with limited responsibilities. A Pakistani historian felt that the Muslim League, which had propounded the idea of a separate homeland for the Muslims, was using the demand to leverage a deal within a united country. There might also have been an unwritten understanding to operationalize the arrangement. It bears recalling that Mountbatten was himself initially horrified with the idea of partition given the administrative and human costs involved.

But the Congress President went to the press with the statement that the party would be entering the Constituent Assembly unfettered by any commitment. Without reliable knowledge of precisely what had transpired, it is difficult for us to understand why the announcement provoked the Muslim League Supremo, Mohammad Ali Jinnah, to declare “Direct Action Day” on which date horrific communal riots occurred across the country, the contested city of Calcutta being particularly affected. The stated operation for deliverance from British rule turned out to be retribution against the Hindu majority. Akbar contends that Jinnah’s exasperation stemmed from the seeming dissipation of a war-time deal with Britain which would have steered him to superintend a subcontinent cast in syncretic Islam. The events culminated in the compromise of partition, by which Muslims would have their homeland on the basis of religion. Hindus in a truncated India agreed to live with the Muslims who stayed behind, and abide by the principles of a “secular” society.

The question is, had other things been equal, could the subcontinent been spared, what was by many accounts, a hurried and ill-considered chapter leading to one of the biggest human migrations in history, apart from crime and violence, and a trail of incessant tension, triggered by the “unfinished legacy”? To be sure, there were many considerations. But one that is as old as the hills is the clash of personalities, arguably ambition, stoked by backroom bargains with the rulers, which Gandhi had tried to balance from the sidelines by making a seemingly heretical recommendation of future Premiership to the other side.

Gandhi’s religious trajectory towards overcoming human susceptibilities could have kindled the proposition. The text at hand (Akbar’s) does not refer to this particular episode, though it does highlight the growing estrangement between Gandhi and Nehru. The Prime Minister’s authority would have been heavily denuded, compared to what it is today, but the seat of power alone would have tempered the erstwhile nationalist who had left the Congress because of strong personal animosity against his rival. Intense feelings would not have eventually got out of hand. For the record, the official Transfer of Power document merely states that Nehru doubted Jinnah would accept Gandhi’ suggestion.

At the political level, the proposal was arbitrarily dismissed as a lapse of unendearing eccentricity, but the enduring reality of deification of political idols, and their inverse vilification by the other side, persists. Lost in the bargain is the promise of out-of-the-box signals, which could still save the day in surcharged circumstances.

You get that kind of feeling when reading of the countless instances of “satyagraha”, in personal and public life. There could be an unreality about applying the live force of truth to the conundrums of India’s political inheritance; but Gandhi had subscribed to the chronicle of faith and duty being put to real-life practice. The narrative projected by a contemporary political aficionado would not normally predicate a celebration of Gandhi, but this one seems to tell a story. When basic principles vary, you get to the reality by reaching out, investigating, dialoguing and possibly messaging politically, every word of which should not be taken to heart. If truth and morality are not absolute and exist in relation to society and historical context, Gandhi’s frame of reference was poles apart from Jinnah’s. But he had tried to reach out.

There are spaces between the social circumstances and historical perceptions of political competitors in India. The facts of a situation could dawn on them in different ways. Even despite the limited means at their disposal the subcontinent’s political icons had mustered the ingenuity to create a potential scenario for the transfer of power to a federal structure in which the contours of governance and the distribution of resources could have been more equitable than what transpired. Atavistic instincts would also have been absorbed. But it was squandered by the dialogue of the deaf. If the constituents of the political leadership do not connect today, they could be reminded of a major failure more than seventy-odd years ago!

Those footprints haunt us though the native capacity to upend the blues also exists. India’s prodigiously productive early 20th century monk and reformer Swami Vivekananda won hearts and minds as much by taking into his own hands work on the plague sweeping Calcutta as defining the  universal divinity of man. Engaging a restive political class’s energies on a mortal coil should stir devout consensus in a zone that transcends temporal politics.

India has won WHO’s praise for its handling of the coronavirus epidemic thus far but there is something tragic and intimidating in the fear of being quarantined just as much as there is heightened expectation when Mrs Sudha Murthy, chairperson of Infosys Foundation and the philanthropist wife of the IT giant’s co-founder, Narayana Murthy, offers to do the civil work in equipping a government hospital with 500-700 beds in collaboration with the celebrated cardiologist and entrepreneur, Dr Devi Shetty, who would share the medical equipment. Such trailblazing humanitarianism was expected to have the domino effect. The Department of Biotechnology announced it was partnering the Norway-based Coalition of  Epidemic Preparedness and Innovations (CEPI) to fund development of vaccines for Covid-19. More encouragingly, the Pune-based Serum Institute of India (SII) has claimed a dramatic advance in developing a vaccine. To go by the somewhat technical communication of the Institute: “the virus-vaccine strain developed in laboratories has reached the animal clinical trial stage, with possible results within two months”. Hopefully over the long run primary health care will find rightful precedence in national priorities to make such contingencies manageable.

Economists tell us that the crisis will have consequences necessitating popular participation and cooperation in governance and social security, perhaps easier terms of trade with neighbors in the same boat. Discourse on Akbar’s volume appears undecided on the theory that Partition was a done deal much before the political pyrotechnics in Delhi because a united India with tranquility from Burma in the east to Afghanistan, Iran and Iraq and the Middle East in the west would have created a territory of unprecedented prosperity, potentially a challenge to the West itself. Whatever the authenticity of the power play supposition, the human condition could still be redeemed by the natural laws of compassion and perhaps extension of people-to-people relations to the South, if nature is allowed to take its course, as the book seems to suggest of the big picture.