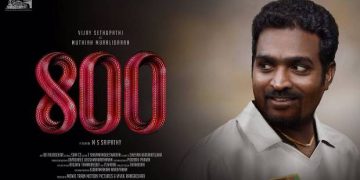 ‘800’ and the unsavoury reality of India’s film industry

‘800’ and the unsavoury reality of India’s film industry

Because of their wide reach, competing political forces unleashed by democracy have targeted films to suppress inconvenient thoughts, ideas and opinions Colombo, October 20: The US$ 2.5 billion Indian film industry, which churns out more than a thousand movies a year and is watched by millions, is now facing an intense political heat it faced only once before, in 1975-77, when Prime Minister Indira Gandhi imposed a State of Emergency to tackle an uncontrollable opposition agitation.

The industry has been coming under political pressure because of its tremendous reach and ability to shape people’s minds on a large scale. Competing political forces, unleashed by democracy, have targeted films and film makers to suppress inconvenient thoughts, ideas and opinions. They often decide a fate of a film, whether it will be released or not, and whether it’s content (and it’s stars) will remain as intended by the film maker.

As things stand, the film maker has no absolute right to choose the subject he wants and portray it as he wants. Neither can he leave the matter to the audience to judge. The audience too has lost it’s right to see the film it wants. With the State machinery and the judiciary also going by the dictates of these political forces (or mobs), the film maker’s autonomy and his constitutional right of free expression become fictional. Clearly, nobody  believes in Abraham Lincoln’s dictum: “As I would not be a slave, so I would not be a master. This expresses my idea of democracy.”

Vishal Langthasa, a student of Bollywood films, has given a number of examples of mob censorship: The 2006 Hindi film Fanaa was banned in Gujarat because the film’s hero, Amir Khan, had spoken against the forced removal of tribals and peasants by the Narmada River dam project in that State. The Bharatiya Janata Party (BJP) government in Gujarat, which was backing the project, felt that the matinee idol’s support for the protest would strengthen the protest. In 2007, Gujarat banned Parzania because it was about a Parsi boy who went missing during the infamous 2002 anti-Muslim riots in BJP-ruled Gujarat. The film went on to bag the National Best Film and Best Actress awards.  Aaja Naachle was banned in Uttar Pradesh and Punjab because the film had a song which had a line saying: “a cobbler tries to become a goldsmith” which was deemed a slur against the cobbler caste, deemed “lower” in the Hindu social hierarchy than goldsmiths.

Anurag Kashyap’s Black Friday a film on the serial bomb blasts in Mumbai, was banned nation-wide in 2005 because it named names. But the ban was lifted in 2007 following a court order. In 2008, Jodha-Akbar was banned in several North Indian States because the Rajput or Kshatriya community accused the film producer of making Jodha, a Hindu Rajput princess, the wife of the Muslim emperor Akbar. Eventually, the Supreme Court stayed the ban on the film in Uttar Pradesh, Haryana and Uttarakhand. The ban in Madhya Pradesh was lifted by the High Court. Eventually Jodha Akbar proved to be a hit. Deshdrohi a   film on the way migrant workers from Uttar Pradesh were being exploited in Maharashtra was banned at the instance of the Maharashtra Navanirman Sena (MNS) as it showed Maharashtra State in a bad light.

Referring to the controversy surrounding the death of young Bollywood star, Sushant Singh Rajput, Nandy said: “The Hindu nationalists are hoping this sudden and unexpected assault on Bollywood will force the film industry into complete submission to a government keen on wiping out dissent and liberal ideas. They want Bollywood at their command, an accessory to furthering their exclusivist, majoritarian politics.”

Spearheading the North Indian biased Hindutwa/nationalist lobby now is Kangana Ranaut from North India. She is now facing a police case for allegedly fomenting Hindu-Muslim conflict in Bollywood. The suicide of star Sushant Singh Rajput from Bihar in North India was turned into a murder by the pro-BJP mainstream media and social media and accusing fingers were pointed against an alleged drug mafia comprising stars from outside the Hindi-speaking belt like Deepika Padukone from Karnataka and Rhea Chakraborty from West Bengal.

In contrast to Bollywood (and North India generally), the South Indian film industry (and South India generally) has been free from casteism, regionalism and communalism thanks to left-oriented and secular movements like the Dravidian movement. Right from the 1950s, socially and politically progressive and rationalistic themes have been used by the industry, in consonance with the progressive movements taking place in the society at large, especially in Tamil Nadu and Kerala.

However, due to influences from communal forces in the North, Muslims in Tamil Nadu demanded a ban on Mani Ratnam’s film Bombay because a Hindu boy was shown as falling in love with a Muslim girl.

That communal/ethnic politicization is creeping into the Tamil film industry is seen in the controversy surrounding the making of the film 800 on the Sri Lankan cricketing legend Muthiah Muralitharan. Murali was trolled in the media for not siding with the fellow Tamils of Sri Lanka when they were subjected to military action dubbed by pro-LTTE  Tamils as “genocide”. The media and pro-LTTE Tamil nationalist leaders like Seeman, Vaiko, Bharathiraja and poet Thamarai have slammed Murali for describing the day on which the Tamil Tigers were vanquished and the war ended as the “happiest day in his life”. It was also alleged that he had told the visiting British Prime Minister David Cameron that Tamil women who were agitating for the recovery of their disappeared sons were “pretending”.

Tamil Nadu politician Vaiko and Sri Lankan politician Mano Ganeshan pointed out that Murali had sided with “Sinhala-chauvinist” Mahinda Rajapaksa. Ganeshan said Murali campaigned for Sinhala chauvinist Wimal Weerawansa in the last parliamentary elections in Colombo district and put up his brother as a candidate in Nuwara Eliya district which resulted in the Tamils losing one seat there.

Murali’s critics said that the film 800 should not be only about his cricketing career and that it should include the struggle of the Tamils to come up in life in Sinhala-Buddhist-dominated Sri Lanka. More importantly, it should show the “genocide” at the end of the war and Murali’s insensitive and pro-Sinhala remarks about the end of the war.

Murali’s plea that he had helped educate Tamil kids in the war-affected areas and that he had been coaching them in cricket did not cut ice in Tamil Nadu where the Dravidian movement is rising again given the imposition of Hindi and the rapid dilution of the autonomy of the States under Prime Minister Modi’s Hindu nationalist regime.

Realizing that the acting career of Vijay Sethupathi, who was to play Murali in the film, was in danger as he was also being dubbed a co-accused in the media trial, Murali issued a statement saying that he was requesting Vijay Sethupathi to drop out of the film. Relieved, Sethupthi replied: Thanks.Goodbye.

Forces with political agendas in mind, had denied the producer of  800 his constitutional right to free expression, Murali his right to tell his story as he wants, and the audience the right to see or not to see the film. This does not augur well for freedom and creativity in the Tamil film industry, qualities necessary for its survival and viability.