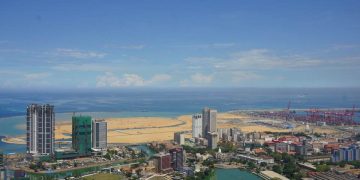 Colombo, Jan. 28 (newsin.asia) – Six Sri Lankan seamen, on board a container ship which had left China and is currently on its way to the Gulf of Aden, are reported to be suffering from high fever, the FleetMon reported.

The container ship CMA CGM URAL was on its way to the Suez from China via Singapore and the Mediterranean / Black sea ports.

The ship is reported to have docked at Chinese ports in Shenzhen, Xiamen, Ningbo-Zhoushan and Yangshan from January 8 to 15.

It was reported that the Merchant Shipping Association of Sri Lanka was alerted about the crew’s illness yesterday morning.

“It is not known at present whether the seamen are infected with the coronavirus or whether they were suffering from some other illness. The ship will call at a port in Suez on January 30 when the exact type of disease can be identified with the help of better medical facilities. If the situation deteriorates and condition of the ill seamen significantly worsens, they’ll have to be medevaced as there are more than enough means, ports and medical facilities in the Red sea region,” FleetMon reported.