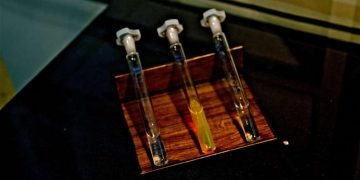 5 of the most important vaccines in history

5 of the most important vaccines in history

For many scientists worldwide, the year 2020 was a race to develop a vaccine for the coronavirus. Nov 30 (Insider) – For many scientists worldwide, the year 2020 was a race to develop a vaccine for the coronavirus. Designing and testing a vaccine is a slow process — but once a vaccine is available, it can slow the spread of infection and disease.

“The COVID-19 pandemic is a living testament to the need for vaccines,” says Kirsten Hokeness, PhD, professor and chair of the department of science and technology at Bryant University.

Any vaccine is an achievement. Some, however, stand out as being historically significant. Here are five of the most important vaccines ever developed:

Smallpox was the first successful vaccine, developed in 1796 by Edward Jenner. “Jenner really popularized the procedure, making it a common practice,” says Hokeness.

The WHO describes smallpox as “one of the deadliest diseases known to humans.” This virus leads to flu-like symptoms followed by pus-filled blisters on your body, per the Mayo Clinic. Hokeness notes that historically, it killed three out of every 10 people who contracted the disease.

Smallpox is the only disease ever to be eradicated worldwide. That means that these days, no one receives the smallpox vaccine — it’s no longer necessary. This elimination of the disease “is one of the greatest international public health achievements,” says Hokeness.

When the polio vaccine became available, people lined up around the block to get it, says Joseph Comber, PhD, a biology professor at Villanova University.

“The visions of children using iron lungs to survive are permanently ingrained in our history of infectious disease,” says Hokeness.

Children are particularly at risk for poliomyelitis, a highly infectious virus that spreads through contact with someone who has the infection, as well as through contaminated food and water, says Hokeness. In some people with polio, it can lead to paralysis, which can be permanent, per the WHO.

Today, the Centers for Disease Control and Prevention (CDC) recommends that children get four doses of the polio vaccine, beginning at two months of age. There hasn’t been a new polio case in the United States since 1979, Hokeness says. Around the world, the number of cases has decreased as well — in 2018, there were just 33 cases.

Today, kids get two doses of the MMR vaccine, which protects against measles, mumps, and rubella — one at 12 to 15 months, and a second dose at ages 4 to 6. The vaccine is highly effective against the measles, which is a very contagious respiratory virus.

“It is so contagious that if one person has it, up to 90% of the people around him or her will also become infected if they are not protected,” notes the CDC.

And the consequences are severe: measles can lead to pneumonia, encephalitis (brain swelling), and in some cases death, says Hokeness. Vaccines for measles became available in 1963. Before vaccines were available, 3 to 4 million people got the measles annually.

In the year 2000, thanks to widely available and effective immunizations, measles was declared eradicated in the United States. More recently, however, measles outbreaks began to occur again. In 2019, there were 1,282 cases of measles in the United States, per the CDC.

This is a result of a few factors. Some vaccines, like measles, offer waning immunity, and you may need to get a booster, which is a follow-up shot that supplements the initial vaccine.  In addition, misconceptions about vaccines have led some parents to not vaccinate their children, and since the virus is not eradicated world-wide, travel to hotspots can lead to outbreaks.

“The recurring outbreaks of this disease have also fostered the paramount need for vaccinations to protect our population and the risks we face from lapses in vaccinations,” says Hokeness.

The Tdap vaccine protects against three diseases: tetanus, diphtheria, and pertussis. All three of these diseases are caused by bacteria and have the potential to be deadly.

Pertussis — better known as whooping cough — can be life-threatening for babies, although it’s not as serious for adults. Until they are old enough to get the vaccination, “infants rely on everyone around them being vaccinated against whooping cough,” says Comber, who lists the pertussis vaccine as being especially significant.

During each pregnancy, women need to get the Tdap vaccine, as the immunization may help protect the baby. Anyone who will be around a baby — friends, family, healthcare professionals, daycare employees, and so on — should also make sure they have this vaccine and any necessary booster.

The history of the HPV vaccine is not so distant — this vaccine first became available in 2006. Human papillomavirus, or HPV, is the most common sexually transmitted infection in the US, with 14 million Americans contracting HPV each year.

There are many strains of this virus — some of them are linked with cancer, including cervical cancer, penile cancer, and cancers of the back of the throat. Vaccination has led to a 29% decrease in cervical cancer, according to a 2018 study from the American Journal of Preventive Medicine.

“This vaccine is one of the closest things we have to a cure for cancer,” says Hokeness. The HPV vaccine is given in either two or three doses to children and teens — getting this immunization at a young age, before sexual encounters, is what makes it effective.

Vaccines are important because they save lives. For example, the WHO estimates that immunizations save 2-3 million lives, each year, from diseases like diphtheria, pertussis, measles, and influenza.

The effectiveness of vaccines, however, depends on everyone continuing to get them — as some vaccines aren’t safe to administer until babies are 12 months old.

“It’s really important to get vaccines — not only are you protecting yourself and your kids, but you’re also protecting other people in the community,” says Comber.