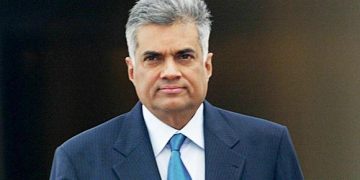 Colombo, July 21: Sri Lankan Prime Minister Ranil Wickremesinghe is pushing for  closer economic ties with Tamil Nadu and other states of South India through an improved India-Sri Lanka Free Trade Agreement (ISLFTA) and the proposed Economic Technical Cooperation Agreement (ETCA) with India which is to be signed by year end, The New Indian Express reports.

Speaking at the South Asia Diaspora Convention in Singapore on July 18, Wickremesinghe said: “The complementary economic developments in South India and Sri Lanka will be enhanced by ETCA, which will provide an impetus to the existing synergies.”

“ As you are aware, South India is home to six key ports in India – the Chennai port and Tuticorin Port in Tamil Nadu, the Visakhapatnam Port in Andhra Pradesh, the New Mangalore Port in Karnataka, the Cochin Port in Kerala. A significant share of Sri Lankan exports enter into India through ports such as Chennai, located in Southern India, and a significant share of the cargo are transshipped to ports located in the Southern India.”

He further said: “With the proximate location of industrial zones and logistic and financial services along this strategic maritime corridor, Sri Lanka and South India provide attractive investment opportunities for a range of activities in industry, information technology and tourism.”

Wickremesinghe pointed out that India’s five southern states – Karnataka, Andhra Pradesh, Tamil Nadu, Kerala and Telengana – have a population of 250 million people and a combined GDP of nearly US$ 450 billion. With the addition of Sri Lanka’s US$ 80 billion GDP, this sub-region will have a US$ 500 billion economy. The ETCA has the potential to promote a rapid growth of the US$ 500 Billion sub regional economy.

The Sri Lankan Prime Minister said that his government is negotiating a Free Trade Agreement (FTA) with Singapore, which has a Comprehensive Economic Partnership Agreement (CEPA) with India. Therefore, Sri Lanka’s close proximity to the fast-growing South Indian states will offer a strategic economic advantage to Singapore.

Tamil Nadu and South India also stand to benefit “immensely’ from Sri Lanka’s uniquely positioned geo-strategic advantage – its location at the crossroads of major shipping routes connecting South Asia, the Far East and the Pacific with Europe and the Americas, Wickremesinghe said.

“By next year the Singapore-India (CEPA), the Indo-Lanka ETCA and the Sri Lanka-Singapore FTA, will enable the southern sub region of South Asia and Singapore to establish a tripartite arrangement for trade and investments.”

“Such a bold agreement posses the potential to enhance economic cooperation between our three countries that will also have a positive impact on the Bay of Bengal trade. At the other end, Singapore too will expand its importance and capacity for business networking in the region,” the Lankan PM said.