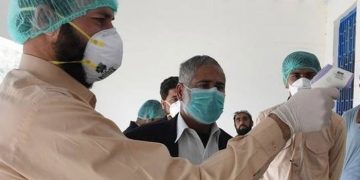 Lahore/Islamabad, April 6 (The News) – The number of confirmed COVID-19 cases in Pakistan rose to 3,161 on Sunday after new infections were confirmed. These included 1,380 cases in Punjab, 881 in Sindh, 405 in Khyber Pakhtunkhwa, 192 in Balochistan, 78 in Islamabad, 210 in Gilgit-Baltistan and 15 cases in Azad Kashmir (AJK). One hundred and seventy patients have recovered, while 47 have died.

Twelve died in Punjab, 15 in Sindh, 16 in Khyber Pakhtunkhwa, one in Balochistan and three in Gilgit-Baltistan. The government has enhanced testing facilities. A total of 34,885 tests have so far been conducted.

Isolation facilities have been established in 462 hospitals across Pakistan with a capacity of 7,295 beds. A total of 34,885 tests were conducted in all, including 1,978 tests during the last 24 hours. There are 462 hospitals with COVID19 isolation case management facilities across the country with7,295 beds. In these hospitals, 1,177 COVID patients have been hospitalized out of them 18 are critical.

Meanwhile, 323 quarantine facilities have been established with 17,911 cases housed at these facilities. Meanwhile, the number of confirmed patients continues to grow in Sindh, as 51 new cases were reported from different areas of the province during the last 24 hours raising the tally of such patients to 881.

Talking to journalists, Sindh Minister for Heath Dr. Azra Fazal Pechuho Sunday said as many as 51 more cases of coronavirus had been diagnosed in Sindh of them 37 were from Karachi, four from Hyderabad, two from Noushehro Feroz, and one each from Sukkur and Sajawal. She said at least 13 people were affected by the pandemic in Larkana, while 58 people had recovered.

Meanwhile, the PTI leader and Member of the Khyber Pakhtunkhwa (KP) Assembly Abdul Salam Afridi said on Sunday that he had recuperated from the novel coronavirus. He said his latest test for COVID 19 was declared negative and thanked Allah Almighty for his recovery from the illness.

In Lahore, a 60-year-old woman was declared dead due to coronavirus at the Mayo Hospital on Sunday. So far, six virus deaths have occurred in Lahore, four in Rawalpindi and one each in Faisalabad and Rahim Yar Khan.

The Sunday’s confirmed infections included 192 new cases among the members of Tableeghi Jamaat, 28 prisoners in Camp Jail Lahore and 12 doctors in Dera Ghazi Khan. Out of the total of 1,380 confirmed Covid-19 cases in Punjab, 443 are members of Tableeghi Jamaat, 309 pilgrims, who had returned from Iran, 28 prisoners and 600 citizens, who either had travel history or local transmission.

Earlier, a huge number of new cases had emerged from amongst 10,263 participants in the Tableeghi Ijtima in Raiwind in the outskirts of Lahore, who had now been kept in isolation at different quarantine facilities in 33 districts of Punjab. Now, a high number of infections have been detected among jail inmate, posing another big challenge to the authorities control the spread of coronavirus.

Out of 443 confirmed Covid-19 preachers, a total of 359 are at a quarantine centre at Raiwind, 31 in Hafizabad, 13 each in Sargodha and Vehari, eight in Gujrat, six in Rawalpindi, four in Khushab, three in Mandi Bahauddin, two each in Nankana Sahib and Rahim Yar Khan and one each in Bhakkar and Rajanpur.

Out of 309 confirmed cases from amongst pilgrims from Iran, 213 are admitted to a quarantine centre in Dera Ghazi Khan, nine in Multan and five in Faisalabad.

As many as 25 prisoners have also been tested positive for the Covid-19, taking the confirmed number of prisoner cases to 28, which has set alarm bells ringing among the authorities in Punjab. The Punjab Health Department has issued guidelines to the Home Department for handling the coronavirus patients in jails.

So far, 600 citizens have also been tested positive for the virus in 27 districts of the province. The highest number of such cases has been reported in Lahore where 260 patients are under treatment at different centres.

As many as 93 patients are under treatment in Gujrat, 57 in Rawalpindi, 31 in Gujranwala, 29 in Jhelum, 18 in DG Khan, 14 in Mandi Bahauddin, 13 in Nankana Sahib, nine each in Faisalabad and Vehari, eight in Kasur, seven in Sialkot, six in Hafizabad, five each in Narowal, Chiniot and Sargodha, four in Multan, three each in Rahim Yar Khan, Mianwali, Bahawalpur and Lodhran and one each in Sheikhupura, Attock, Layyah, Okara and Khushab.

Meanwhile, 12 doctors, including two female doctors, in Dera Ghazi Khan were declared Covid-19 positive on Sunday after they contracted novel coronavirus while treating patients in DG Khan, the host district of Zaireen from Iran.

Punjab Health Minister Dr Yasmin Rashid, meanwhile, said that there were only two coronavirus patients in critical condition in Punjab now. She said that 90 per cent patients did not show any symptoms of the virus while the rest experience fever and coughs.

The minister said that 10,000 suspects were from Tableeghi Jamaat and 187 people were admitted to different hospitals. She said in total 18,269 people had been tested for the virus so far.

Ameen Abbasi adds from Bahawalpur: The coronavirus claimed the life of a 67-year-old man, Malik Ahmad Hassan, here on Sunday.

He was admitted to the isolation ward of Civil Hospital Jhangiwala Road Bahawalpur, two days ago. He had been on ventilator. Earlier, he was brought to Bahawal Victoria Hospital (BVH) Emergency Ward on Thursday where his family members produced the corona test report in which he was declared coronavirus positive.

According to Deputy Commissioner Bahawalpur Shozab Saeed, the funeral prayers and the burial of the deceased were carried out in line with the standard operating procedures (SOPs), set for coronavirus victims.

This was the first death from coronavirus in Bahawalpur district, he added. Meanwhile, as many as 15 new suspected patients of coronavirus were registered in Azad Jammu Kashmir during the last 24 hours. All of them were tested, the state health authorities said on Sunday.

Since two new suspects were tested positive during last 24 hours, the number of COVID-19 suspects tested positive in AJK has increased to 15, the health authorities said in an official statement released to the media.

At least 94 more patients were discharged from various quarantine centers in AJK on Saturday after they were tested negative. In a related development, Pakistan has decided to open its Torkham and Chaman border crossings for four days from today (Monday) to let Afghan nationals get back to their country.

Foreign Office Spokesperson Aisha Farooqui said in a statement that the step had been taken on a special request of the Afghan government based on humanitarian considerations and to facilitate the Afghan nationals.

The statement further said as a neighbour and in view of fraternal bilateral relations Pakistan remains in abiding solidarity with the people of Afghanistan particularly at this time of global pandemic.