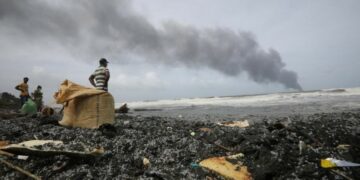 Colombo, June 30 (Daily Mirror) – Following the tragedy of the MV X-Press Pearl cargo vessel, which had burnt and sank in Sri Lankan waters, only 40% of the plastic micro pellets in the ship have washed ashore and there was no trace of what had happened to the remaining 60%, Environment Minister Mahinda Amaraweera said.

The Minister expressed these views while participating at a progress review meeting held at the Ministry and the discussion took place to review the progress of the work of the Central Environmental Authority (CEA) so far.

“A large amount of plastic from the vessel has been dumped on our shores. We have so far stored almost all of them in 44 containers in the Wattala area. According to the CEA, the containers are loaded with 1,034 tons of plastic pallets,” he said.

“I have a list of items on board the sunken Express Pearl ship. They were not brought to our country alone. There could have been cargo for other countries also, according to the list. There are over 190 varieties, the majority of which were plastic,” he explained.

“Investigations into the debris on the beach have not yet been completed. I also conducted research on this plastic material and, as per the information that reached me, only 40% of the plastic on the ship washed ashore. I am not quite sure what had happened to the leftover plastics. The remainder. They might have either been perished by fire or swallowed by the marine creatures or the floating plastic pellets might have washed away to other areas with the tides.

However, even the United Nations stated that this is the first time that a massive volume of plastic was unleashed to the world’s oceans in a lone instance.

Environmentalists have also stated that, given the size of the carcasses of dolphins and sea turtles currently being washed ashore, are the consequences of the inferno.

Also, instructed to formulate a systematic program to inform investors who are interested in products that can be used as an alternative to the plastic and polythene products which are currently proposed to be banned.